An article from the North Middlesex Chronicle, 13th January 1940

The fact that the Alexandra Palace television studio is closed continues to be a very sore point with the founders of the system. It is feared that the lead gained before the war will be lost, as was the lead in films during the last war, never to be regained. The station was closed as part of the Government plans in the event of war, as it was feared that the transmitter would prove an infallible guide to enemy aircraft. However, the fact that cinemas have re-opened and are doing a roaring business is an argument for re-starting television, because much the same financial interests are concerned, and television during the past few years has become the hope of the cinemas, now that “mighty” organs, coloured films and other extra turns have lost their appeal.

Manufacturers of wireless sets have also poured money into television in the hope that millions of radio fans would buy television sets, but so far their investments have proved futile, and the sets now in stock are rapidly becoming expensive dead stock.

In the meantime it may be remembered that television is a Government monopoly under the B.B.C., which has provided funds for development, and it is a question whether these funds should be used to provide attractions for the cinemas, or whether it should continue to be developed for home entertainment, and the two purposes do not blend.

A leading London paper stated on Saturday: “Many experts believe that the station might be re-opened, under certain conditions without any risk to the public security; and it has been urged that the Government’s Television Advisory Committee should be consulted. As yet, that Committee has not met since the war opened. Having regard to the substantial interests engaged in this highly technical enterprise, and to the national advantage of retaining the leadership in it, a reconsideration of the grounds for the existing closing order might not be amiss, without any abatement, of course, of the postulate that the public safety must be the supreme law. It would not, however, be irrelevant to remember that the BBC picture-programmes would afford welcome relief from the black-out hours.

Over £100,000 was spent at the Alexandra Palace and a large staff of experts was engaged, and all this has been jettisoned. If some means could be suggested whereby television could help the progress of the war there would be more hope of a revival than by harping on about the “loss of the lead” to Germany and America.

There are two popular schools of thought on the subject of television, One believes that the battle is on between the Screen and the new medium, with the inevitable end of the film programme as we know it today. Why, they argue, should people leave their homes on cold, wet nights when they can switch on to Colman or Garbo by their own firesides? The rival prophets are more concerned with the psychological side of the question. Filmgoers are gregarious, they say. Half the attraction of going to the cinema can be found in the fact that men and women prefer to take their pleasures – and troubles – in a herd. Television screens will merely give an added attraction to film-going.

The question asked by “interests” is, should the Government continue to hold the monopoly of television?

According to Isidore Ostrer, director of the Gaumont-British circuit, the situation has not altered sufficiently rapidly to make a change desirable. “Many people think that a private station should be erected for public entertainment,” he said. “Personally, I am one the opinion that television should be left to the BBC at the momentbut that the time will soon arrive for the erection of such a station.”

The “Screen Pictorial” states : “Television is still a comparatively expensive affair. For a manager to equip his theatre with all the apparatus necessary, he will have to sign a cheque for £1,000 or more. Sight transmission, in fact, is not yet a commercial proposition for the small man. Still, no one seriously doubts that the time will come, as it came with the talkies, when cinemas without television will be considered absurdly out of date. If the new medium continues to be built up on its present lines, it seems that it must eventually sign the death warrant of the second feature – “B” pictures and news-reels. Here then will be a state of affairs in which films and vision co-operate usefully together for a common aim – entertainment of the public for the public.”

Note: BBC television broadcasting didn’t in fact resume until June 1946. One very appealing story is that the service had been in the middle of a Mickey Mouse cartoon when it was cut off in 1939, and that when transmission resumed in 1946 it picked up at the same point in the cartoon with an apology for the interruption in service.  The BBC’s account is that this wasn’t the case, but that the schedule from the last day in 1939 was repeated on the first day back in 1946.  This included the Mickey Mouse cartoon as well as a Mantovani concert. 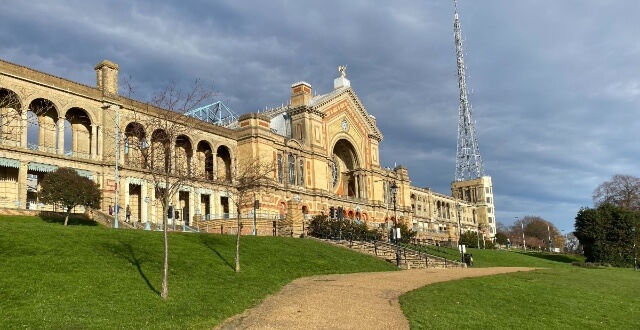