The material on this page is organised chronologically, with the most recent additions at the top.

As well as the individually authored articles, there is also a series of 'brief histories', produced by the Society, to give a general introduction to the history of the local areas and buildings.

The birds and the bees in 19th century Muswell Hill

The 19th century naturalist who immediately comes to mind is Charles Darwin whose seminal work, The Origin of Species, (1859) rocked the sedate world and beliefs of the Victorian Establishment. It is, therefore, surprising to learn that Darwin rated W B Tegetmeier an authority on several species of birds and on bees and corresponded with him for years. Indeed, Tegetmeier’s house in St James’s Lane, Muswell Hill, came to be known as ‘The Bee House’ as a result of his extensive work studying and breeding them.

END_OF_DOCUMENT_TOKEN_TO_BE_REPLACED

HORNSEY IN HISTORY
A 1972 series of Hornsey Journal articles by Ian Murray,
first Chairman of Hornsey Historical Society and Haringey Council Archivist.
The HHS gratefully acknowledges the kind permission of Archant/Ham and High for this reproduction.

Because of its geographical isolation, Muswell Hill remained something of a rural backwater even by Hornsey standards, until 80 or 90 years ago (now nearly 140 years ago – editor). The Hearth Tax returns of 1674 indicate that only 30 houses existed there and at Fortis Green. A public house, however, undoubtedly the Green Man, had stood at Muswell Hill from at least 1552 END_OF_DOCUMENT_TOKEN_TO_BE_REPLACED

We may think that we have nothing in common with the people who waited silently and reflectively at the opening of the Hornsey War Memorial in Park Road on 11th November 1921 but that is not so. We are joined by the word ‘pandemic’, not Spanish Flu this time but Covid 19, and how many people waiting patiently the mandatory 15 minutes after their first, second or booster Covid jab in a room off Hornsey Central Neighbourhood Health Centre in Park Road, N8, realise that they are sitting inside the Hornsey War Memorial? END_OF_DOCUMENT_TOKEN_TO_BE_REPLACED

This is the sixth in our series on Lost Houses of our area. This edited text was written by the late Albert Pinching, HHS Sales Manager for 21 years and editor for 14 years of our annual journal, the Bulletin, who died at the end of July this year. The full text was a chapter in ‘People and Places: Lost Estates in Highgate, Hornsey and Wood Green’, published by HHS in 1996.

Before the advent in 1859 of Wood Green Station (now Alexandra Palace Station) on the Great Northern Railway (GNR) much of the area was farmland claimed from the Great Forest of Middlesex. One of the few distinctive buildings was Nightingale Hall, situated on the SW side of Bounds Green Road, covering the site now occupied by the Adventist Church, with its outbuildings and gardens extending over what are now Northcott and Cornwall Avenues. END_OF_DOCUMENT_TOKEN_TO_BE_REPLACED

This is the fifth article in the series on Lost Houses of the Hornsey area. This mid-19th  century house and grounds was situated on Southwood Lane (now Muswell Hill Road N10) and is associated with the Victorian literary elite. END_OF_DOCUMENT_TOKEN_TO_BE_REPLACED 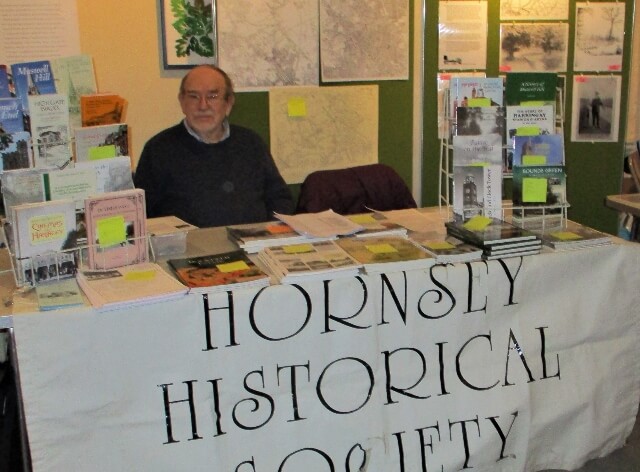 Many of us were familiar with the work of our colleague Albert Pinching who sadly passed away in July. END_OF_DOCUMENT_TOKEN_TO_BE_REPLACED

A 1972 series of Hornsey Journal articles by Ian Murray, first Chairman of Hornsey Historical Society and Haringey Council Archivist.  The HHS gratefully acknowledges the kind permission of Archant/Ham and High for this reproduction.

Part of the southern boundary of Hornsey is neatly marked by the ridge of high ground, known as the Hog’s Back which stretches by way of Hornsey Lane and Mountview Road to Harringay West Station. South of this ridge lies Stroud Green and Finsbury Park which have always been within Hornsey parish. Until the end of the 19th century Hornsey extended even further south, as far as Mountgrove Road, leading into Green Lanes opposite Clissold Park. END_OF_DOCUMENT_TOKEN_TO_BE_REPLACED

This is the fourth article in the series on Lost Houses of the Hornsey area. It has been written by Alice Jenkins, a sixth form History student at Highgate Wood School, who has spent her summer holidays on work experience with the HHS Archive volunteers and who will shortly be applying to universities for admission in autumn 2022. HHS wishes her well.

Topsfield Hall stood in the centre of Crouch End as the manor house of the sub-manor of Topsfield from the late 1780s until its demolition in 1894. END_OF_DOCUMENT_TOKEN_TO_BE_REPLACED

A 1972 series of Hornsey Journal articles by Ian Murray, first Chairman of Hornsey Historical Society and Haringey Council Archivist.  The HHS gratefully acknowledges the kind permission of Archant/Ham and High for this reproduction. 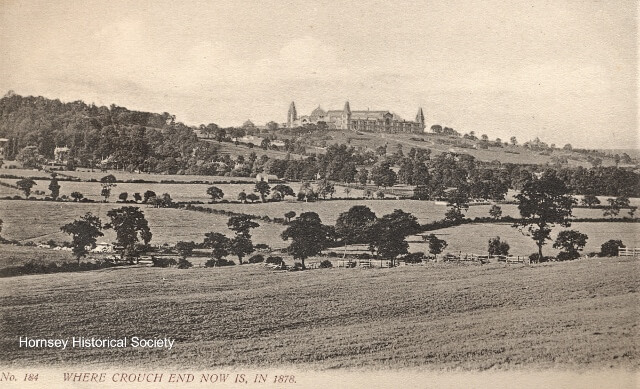 Crouch End is derived from an old English word meaning ‘cross’ and ‘end’ is obviously what it says, an end, boundary or limit. So, the name means the cross boundary. The cross refers either to cross roads as four roads have converged here for centuries, or to an actual cross for which there is some evidence. END_OF_DOCUMENT_TOKEN_TO_BE_REPLACED

On Thursday 19th August, Crouch End will see the return of a major part of its cultural life.  After a nearly eighteen month absence, Downstairs at the Kings Head, one of the oldest comedy clubs in the country, will reopen. END_OF_DOCUMENT_TOKEN_TO_BE_REPLACED