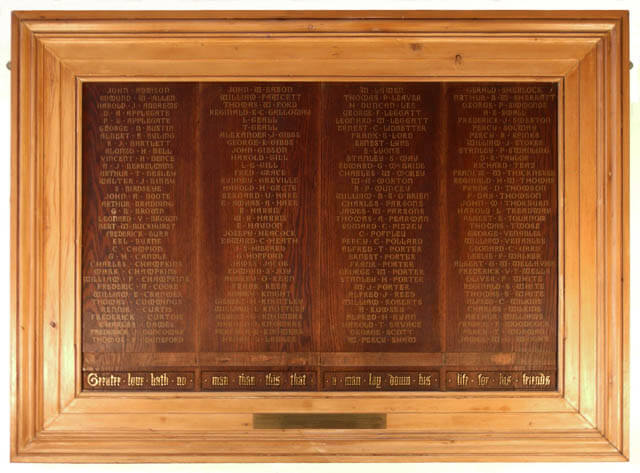 Inside St Mary’s Tower in Hornsey High Street on the north wall of the ground floor room are four panels mounted as one memorial board listing the names of 136 men from Hornsey who died in the First World War. These were found in a skip! How was the mystery of their origin unravelled?

In March 2002 HHS Archivist John Hinshelwood found a message on the answer phone in the Old Schoolhouse about the discovery of four oak memorial panels. He spoke to the finder and established that the panels had been retrieved from a skip outside St George’s Church, Cranley Gardens, N10.

From their appearance, it was likely that the panels were from a First World War memorial; they probably came from a church, or another institution such as a school or hospital. There was no certainty that they were local, since they could have been dumped in the skip from a passing car or van, from anywhere in the country.

The panels were  taken into HHS custody at the Old Schoolhouse. They listed 136 names (34 on each panel), with no identifying titles or military ranks and no indication of provenance. You can read a list of the names on the Memorial Board index of names.

Each panel measured approximately 12″ x 33″. Running across the bottom of all the panels was the biblical text: “Greater love hath no man than this, that a man lay down his life for his friends.”  A reasonably  high resolution image of the memorial board 1MB, shows the names and biblical text more clearly.

John contacted St George’s church and was told that they had no knowledge of the panels. Further enquiries with the Friends of Hornsey Central Hospital and the Royal British Legion also drew a blank, although the latter were keen to help HHS identify the origin of the panels.

John informed the Archives Committee in June 2002. It appeared that an impasse had been reached. The best way of tracing their origin would be to identify some of the names.

At that stage as John’s assistant, I suggested to him that they might try searching the Commonwealth War Graves Commission’s online Debt of Honour Register. The main purpose of this is to record and describe the burial places of servicemen killed in the two World Wars; but it also includes, in most cases, some personal details such as the serviceman’s age and the name and address of his next of kin.

So we logged on to the HHS computer, found the website, and fed in some names chosen at random. The first few records we found were all of soldiers killed in the First World War. All included addresses in Hornsey, most of them quite close to Hornsey High Street. Once we had about a dozen of these, we realized that there was no point in continuing: we already had convincing evidence that the panels were of local origin, but we needed something more precise – something that would link all these war heroes to a particular school, church or other local organization.

Working from the dates of death recorded on the Debt of Honour Register, we started looking for more details of the individuals in the old volumes of the Hornsey Journal in the archive room. During the First World War the Journal carried a weekly “Roll of Honour” and a more detailed obituary column headed “Our Honoured Dead”. Among the obituaries we found there were several references to St Mary’s Hornsey.

Bombardier Arthur John Berkelmans, aged 27, had been a keen sportsman and member of the St Mary’s Hornsey and Wood Green football clubs. His wife’s address was 77 Beechwood Road, Hornsey (a turning off Nightingale Lane). Gunner W. J. Stokes, aged 42, had been a member of St Mary’s football and cricket clubs. His parents lived at 46 Westfield Road, Hornsey (west of and parallel to the present Hillfield Avenue).

Another significant finding was that 2nd Lieutenant G. Sherlock, who died on 21 April 1918 aged 27, was the third son of Marian Sherlock of 13 Barrington Road, and of the late Mr Frederick Sherlock, “so well-known as churchwarden of Hornsey Parish Church”.

One of the few records we had found with no obvious Hornsey connection was that of Major Francis William Thicknesse DSO, who died on 19 October 1917 aged 33, and whose father was the Rev. Prebendary Norman Thicknesse of St. George’s Rectory, 15 Grosvenor Street, London. But the Hornsey Journal told us that the Rev Thicknesse, currently Rector of St George’s Hanover Square, was a former Rector of St Mary’s Hornsey! (In fact, he was at Hornsey from 1904 to 1911, and so he and his family would have been well remembered there in 1917).

Research seems to confirm beyond doubt that the panels came from the memorial chapel in St Mary’s Church, Hornsey, of which there is a photograph in the booklet The story of Hornsey Parish Church (published 1949).

The chapel was designed by the architect George H. Fellowes Prynne, FRIBA, of 6 Queen Anne’s Gate, Westminster (1853-1927). It was dedicated by the Bishop of Willesden on Sunday, 12 November 1922.

The Hornsey Journal for 17 November that year records that, “Oak panelling bears the names, 136 in all, of the men of the parish who gave their lives in the war”. It is surely no coincidence that there are 136 names on the panels given to HHS.

St Mary’s Church Hornsey, the ancient parish church, no longer exists except for the Tower. Since the congregation of St Mary’s combined with that of St. George’s Church Cranley Gardens, some of the original fittings from St. Mary’s have been kept in St George’s. And so we have come full circle. Once we had convincing evidence of a link with the church, John immediately wrote again to St. George’s Church asking whether they wanted to reclaim the panels.

A detailed listing of the names on the memorial boards was compiled for HHS by Jacqui Edwards. Although it is gratifying that the memorial boards have returned to their original home there is still no explanation of how they came to be in a skip in Cranley Gardens! The listing will no doubt be of interest to the many family historians who contact HHS.

In 2003 HHS passed the memorial boards to the Friends of Hornsey Church Tower . Nick Allaway, Friend and Treasurer, made an excellent job of making a wooden frame for them and hanging the board incorporating the four panels in its present position in the Tower room.

Nick has written the First World War story of the 7th Battalion, Middlesex Regiment, raised in Hornsey, who are commemorated on the four panels, in the last five annual HHS Bulletins 2014-2018. An excellent read! Why not purchase them from HHS?

Also, in the 2018 Bulletin, you will find an article by Ann Jones recalling her memories of St Mary’s Church and her thrill at finding a relative of her husband’s on one of the memorial panels.

What happened to the wooden screen in the memorial chapel dedicated to the men of the 1/7th Middlesex Battalion which was erected in 1922 in St Mary’s Church, Hornsey? This is another mystery. Please contact us if you have any information or know the answer.