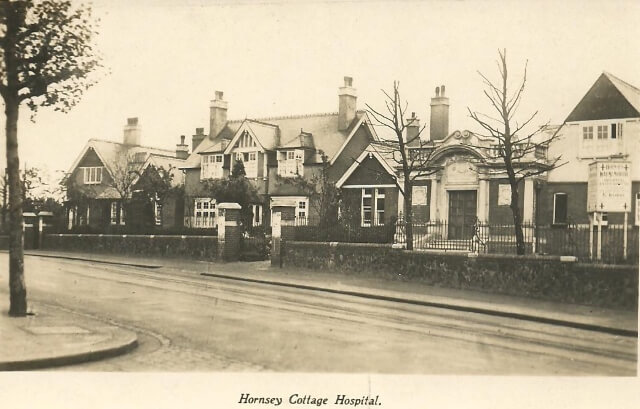 The ongoing fractious debate and depth of feeling felt over the type of borough war memorial best for Hornsey was highlighted in the first of the series Hornsey in 1919. What happened in the intervening months between January and August 1919? Was Hornsey any nearer deciding on the nature of its borough war memorial?

The Hornsey Journal tracks monthly progress in the decision-making:

February 1919 Meetings were held in each of the borough’s nine wards for residents to hear explanations of the four proposed Schemes and their estimated costs: (i) Monumental Memorial, £10,000; (ii) Extension to Hornsey Cottage Hospital, £30,000; (iii) Memorial Hall and Institute, £25,000-£30,000 including a gym, reading room, library and swimming pool; (iv) Endowment of a Hornsey ward in the Great Northern Hospital, Holloway, £5,250.

March 1919: School children delivered voting papers to all houses in the borough so that residents could choose one of the four Schemes and support their choice with a generous contribution. The final choice would be determined by how much money had been donated. On 28th March the newspaper published the results of the voting:

It was reported that Mr George Pain, secretary of Hornsey Cottage Hospital, had promised that the hospital entrance on the main road (Park Road) would have a special feature, ‘of an artistic memorial design’, with an entrance hall hung with marble tablets recording the names of the Fallen.

Readers may wonder why few Hornsey residents voted and why contributions were not greater. One reason was that in tandem with the Borough memorial a large number of other local memorials of different designs were being planned in churches, schools, workplaces and by organisations. Execution of these memorials relied, also, on the contributions of individuals and families. These will be considered in a later article.

April 1919: Early in the month the paper stated that Hornsey’s discharged soldiers disagreed with the hospital extension decision. They felt it was using the names of their dead comrades to expand a hospital and that they were speaking on behalf of the widows and orphans of the men who had died. Interestingly, they added that they had heard of Government plans to take over hospitals, which did not become a reality until 1948. In a letter to the Editor later that month the prejudices of the age were starkly expressed; ‘What would our poor boys think if they knew that Conchies and shirkers were benefiting by the use of institutions to the memory of those fallen in the war?’

May 1919: Fund raising was progressing. The chairman of the War Memorial Committee reported that fifty to sixty contributions were being received daily. £896.6.10d had been raised so far. Twenty thousand circulars had been sent out urging more contributions. When some organisations such as the North Middlesex Cricket Club offered a percentage of their fête proceeds to the Fund feelings were expressed that it was incongruous to connect a war memorial with jollifications. The War Memorial Committee thought otherwise and voted to accept all offers of money raised from entertainments. The estimate for building the extension had now risen to £45,000 – £50,000. The plans would have to be modified if the necessary funds were not forthcoming.

July 1919: Hornsey War Memorial Fund stood at £1,960.3.9d. Committee members felt that with an extra push and their own ‘personal touch’ more money could be added. Each school was asked to put on an entertainment on the Fund’s behalf.

In August 1919 the Mayor advertised in the Hornsey Journal two weeks in a row for the names of the Fallen. The campaign for more donations continued. An intensive funding campaign took place on 1st November with a local flag day and two big races – one a four mile run starting in Crouch End, taking in Archway and Muswell Hill and ending in Middle Lane, immediately followed by a four mile walk through Crouch End, Harringay, looping back through Stroud Green to Weston Park.