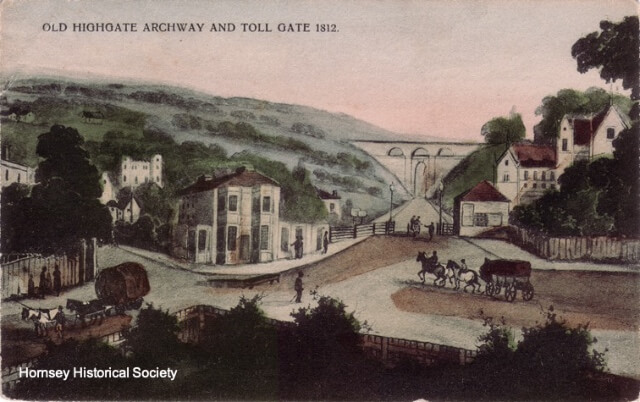 By Elizabethan times Highgate was an established hamlet on the hill that formed a western boundary to the Parish of Hornsey. Residences for City merchants were built on this healthy eminence and cottages for those who tilled the soil and served the big houses.

The Gatehouse and other stopping places on the North Road formed a nucleus of village society. The outline of the present streets was fixed by the 17th century and some of the houses, notably Cromwell House and the Old Hall, remain. In Georgian times Highgate became known as a ‘Town’, with elegant frontages, Assembly Rooms, and a fashionable place of worship in Sir Roger Cholmeley’s Grammar School Chapel.

The Archway Road is Built

In contrast, the Archway Road district ie. the area which is served by the small shops that stretch intermittently for about three quarters of a mile north of the Hornsey Lane viaduct as far as the entrance to Highgate Woods, consists mainly of 19th and 20th century streets and houses. Yet long before the construction of the now less steep road to the north, towards the end of the Napoleonic Wars, a community existed in its path just south of the woodland.

The lower ground between the 14th century High Gate and the older village of Hornsey, with its tall church which called people to services from miles around, had been used since before recorded history began. Judging from the Roman pottery factory unearthed in Highgate Woods and the hoard of Roman coins found in Shepherds Hill, there must have been considerable human activity on the edge of what later became the Bishop of London’s hunting forest in the pre-Saxon era. Medieval settlement occurred mainly along Southwood Lane, the ancient track leading to Muswell Hill, with its holy well and nunnery, and down to Hornsey and Tottenham.

By the 18th century, cottagers had long-established rights to grazing and cultivation on Highgate Common, extending down the south east slopes from the lane and over the shepherds hill (origin of the name today). General Wade (of post-1745 ‘pacification’ and Highland road building fame) found a site for Southwood House where the modern terraces above Hillside Gardens are now, and up the hill Bank Point was built at the apex with the other lane leading down the path along the ridge. The Woodman Inn served the district which included many cottages in Wood Lane.

When the Hornsey enclosures of land were made in 1815-16, that part of the Common on which there are now allotments on the south side of Shepherds Hill was bought as two of many separate parcels so acquired, by ‘Squire’ Jackson, who lived at ‘Hillside’ at the top of the lane called after him, because of his habitual rides to church along the ridgeway, past the sheep-cote. One part had been copyhold of the Manor of Hornsey and the other was bought freehold for £275 12s 6d. The dispossessed were allotted small strips of other land that had hitherto been held in common, on the north side of Wood Lane.

After the land settlement, the newly built Archway Road, cut through the hillside under Hornsey Lane in 1813, surmounted by an elegant arch by John Nash and proceeding northwards to slice through Brew House Wood, acted as a fillip to slow development over the next half century. The wood changed its name to ‘Gravel Pit’ and the roadside pastures became brick fields as Holloway expanded too. A row of little houses erected just past The Woodman, for the foremen of the navvies who laid the road, formed the embryo shopping street with the nearby pub catering for stage coaches as well as drovers and other travellers. Beyond, land was acquired for Southwood Hall, a mansion described in Keane’s Beauties of Middlesex in 1850 and later used as a school (before its demolition to make way for the present blocks of flats).

Editor’s Note: This article, which appeared in HHS Quarterly Bulletin No. 1, Dec. 1973, is based on Historical Notes written by Joan Schwitzer, HHS Vice Chairman, on behalf of the Railway Allotments Group at the Archway Public Enquiry 1973.  This had been prompted by a proposal to develop a motorway-standard dual carriageway road from the Wellington pub junction, north of Highgate village, and the old London County Council boundary at Archway Bridge. That proposal would have meant, (i) the demolition of about 170 houses and shops, (ii) increased deterioration in the environment, (iii) a blight on property and on the lives of many people in the area. The article is presented in two parts because of its length.