An extract from an article in the Bowes Park Weekly News,
5th October 1907 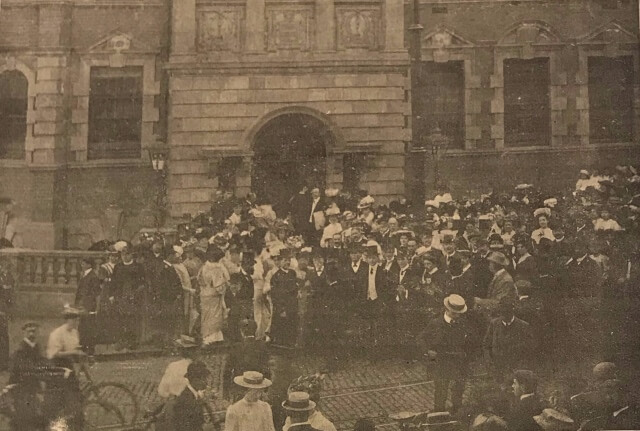 Well, they had a gorgeous day for it, at all events.  At four p.m. on Saturday last there was a bigger assemblage of local somebodies and their friends, than has ever been seen at the Wood Green Town Hall before.To attempt to give the names of the more prominent folk would be to court disaster.

But when we all lined up for the official photo, the scene was memorable.  The sun was glorious and the rows of “subjects” with the Town Hall for a background, and with the crowded bowling green, Wood Green’s successful piece of municipal enterprise, on their right, felt that they were on the threshold of a unique event.

A reception having been held at the Council Chamber, which was gay with flowers, the guests proceeded down the High-road to the Library, the ladies being accommodated in two special tram cars, while the men had to walk.  Never have so many silk hats been seen in the High-road at one time.  Persons who had never previously yielded to the temptation to crown themselves with silk, did so for this once, and it is to be feared that having taken the first step, the “toppers” with their concomitant frock coats, will not be left again for long to the moths and dust.

THE ARRIVAL
Arrived at the new building, Mrs Oliver opened the door and the crush wormed its way upstairs, noting, in passing, the porter in resplendent uniform, the plants and shrubs in the vestibule and the lovely drugget all the way up the steps. Somehow or other everybody was accommodated in the reading-room.

THE CEREMONY
The ceremony commenced with a prayer by Rev. Principal Thomas, in the course of which he alluded to the record of noble deeds and lives to be found in the collection, and prayed that if bad books did find a place, that their readers might be saved from pollution and being misled.

Mr Carnegie, by his secretary, wrote that he was with them in spirit, and letters of regret were read from Mr Alden M.P., Col. Bowles, Messrs W.H and W.G. Rice, and many others.

Passing to the history of the movement in Wood Green, Mr Oliver said the Library Act was adopted in 1891. Then the penny rate only produced £342.00 and it was much to the credit of the Council that they had adopted the Act, when many larger places had refrained.  The 1d rate now produced £880 and the population had grown from 28,000 to 48,000.  The present library originated in the taking over of the stock of books of the Wood Green Institute, which was run by the Unitarian Church.

It became obvious that more accommodation was needed, and it was suggested that he (Mr Oliver) should approach Mr Carnegie.  After considerable negotiation, £8,000 was offered. The gift was in cash, not as some sarcastically suggested, in steel bonds.  And Mr Carnegie, once the plans had been approved, did not impose any conditions as to the spending of the money, nor stipulate as to the class of books selected.

PRAISE WHERE IT IS DUE
Mr Gunyon, the Surveyor to the Council, had designed the building, and it would remain as a memorial to him, though as a rule, a permanent official got too little recognition for good work done.

Mr Carnegie was one of the greatest individualists  and capitalists of the present day.  He was a typical example of successful commercialism.

Some advanced people had cavilled at money being accepted from Mr Carnegie, that seemed to the speaker a narrow and absurd view to take. Possibly the age of capitalism was passing away.

PRESENTS AND A PHOTO
An ornamental key was presented by the Chairman to Mrs Oliver, and a photo was taken of the act of presentation.  Mrs Oliver was also presented with a bouquet by Miss Douthwaite.

VOTES OF THANKS
Cr Cole moved a note of thanks to the donor.  He was in a hurry to get “Mr Carnegie to endow a library at Alexandra Park before the age of capitalism was past”. (Laughter).

Mr Cole continued that he was not one of those who had objected to take this money.  In his opinion Mr Carnegie was doing a work with his money. It would be well if other wealthy men were similarly inclined.  He and his colleagues had, to some extent, and had had for some time, the confidence of the ratepayers, but they would soon lose it if the rates were increased, or if they had even proposed to spend another penny to build a new library.

MILLIONAIRES MAY APPLY
Cr Holmes, in seconding, said as an advanced view holder, that he did not object to millionaires as such.  Such men as Mr Carnegie could no more help being millionaires than some people could help being poor.  And Mr Carnegie did well in giving some of his money for public purposes under public control.  Public libraries had beaten private ones all along the line.  One book a week from a private library would cost a borrower 8s a year at 2d a volume.  Even if they had had to build this library out of the rates, the cost to a Noel Parker per year would have only been 1s 6d.  Private enterprise was a signal failure in the provision of such amenities.