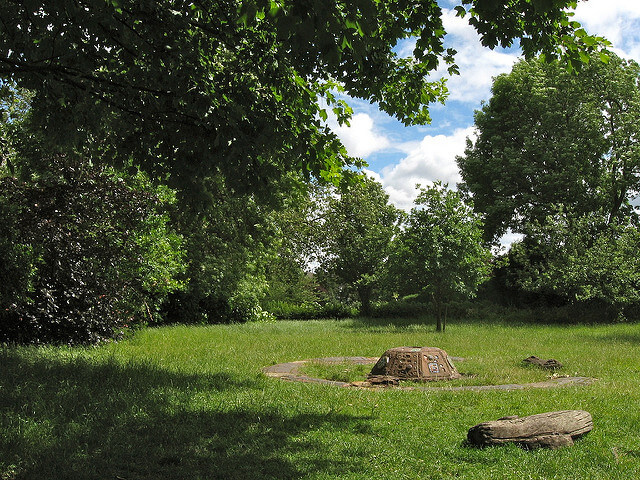 The Friends of Priory Park N8 are working with a company to design a sundial to be placed in The Philosophers’ Garden in the park. But why does the garden have the name it has?

Have you watched the television series Last of the Summer Wine? Set in a Yorkshire village it featured old school friends, Compo, Clegg and Foggy, who consciously set about making the most of their twilight years.

In Hornsey, from the early 1930s into the 1960s, a much larger group of elderly, retired gentlemen made the most of their latter years whilst contributing significantly to local charitable causes. They called themselves, ‘The Priory Park Philosophers, or PPP for short.

The pattern of PPP activities was established very early on and from autumn 1933 recorded regularly in the pages of the Hornsey Journal. The men met daily for a smoke and a chat in Priory Park. They had no intention of letting the grass grow under their feet however.

A lively lot, they played bowls and cricket, organising annual competitions against other clubs, they entertained the community with their singing and minstrel shows and enjoyed dinners, teas and outings on a regular basis, whilst raising money for causes close to their hearts.

The organisation was put on a firm footing from the start with a President, a Chairman, an Annual General Meeting, monthly meetings and officials to look after PPP business and finances. Members had to be elected.

The first President was Mr. G. W. Flood, who for 43 years had been on the staff of the Post Office’s central telegraph office at St. Martin’s-le-Grand. He had come to live in Hornsey from Southend where he had founded the Railway Travellers’ Association. He founded the Post Office Veterans’ Society as well.

So he had all the credentials to organise his fellow Hornsey retirees into the Priory Park Philosophers. He seems to have worn himself out in the task for he died in late April 1935 just 64 years old. He lived at 24, Clovelly Road for 21 years. His obituary in the Hornsey Journal states, “he threw himself heart and soul into the numerous activities”, and goes on to describe how he involved the editor of the Hornsey Journal in his campaign to secure a ‘sun-trap’ shelter for the Priory Park bandstand in which the retired men could chat in comfort.

The Mayor of Hornsey, Alderman Wilfred Rowlands, was approached and he persuaded the Town Council to erect the shelter. The Mayor became ‘hooked’ and was soon a firm supporter of the PPP and its first President.

One was Mr. Albert Harvey who, in his 93rd year, was buried the day after G.W. Flood in May 1935. The son of a watch-maker, he followed his trade as a master man at Clerkenwell and was in business with his son, also called Albert, as jewellers in Southampton Row. Albert Harvey’s longevity meant that on first retiring he came to live in Redston Road, on what had been the Priory Estate (now called the Warner Estate), but finding retirement too boring he went into business again in Edmonton! On his second retirement he settled at 18, Priory Avenue.

Another of the long-remembered characters was the founder-Chairman of the Priory Park Philosophers, Councillor Arthur J. Blake, a leading figure in Hornsey’s civil defence corps during World War Two. A commercial traveller by trade, Arthur Blake lived in Danvers Road from 1910 until taken to a retirement home in extreme old age.

Blake’s infectious enthusiasm for the PPP right from its start helped put it on the map with publicity for its charitable fund-raising in the national press as well as on radio and later on television. In particular, the PPP were enthusiastic supporters of the Royal National Lifeboat Institution and the Alexandra Rose Day.

Arthur Blake could not be missed, he weighed 18½ stone, and this ‘larger than life’ character made sure that the Philosophers had their own hut beside their bowling green in a corner of Priory Park (now The Philosophers’ Garden). He raised much of the money to keep the activities going by appealing to his many friends in the borough. Arthur Blake died in February 1961 in his 90th year.

One important aspect of the Philosophers was their keen interest in youth, often linked to their strong Christian commitment and membership of a local church. Two men can be singled out for their contribution to youth in Hornsey before the war. Robert Doe of 53 Rathcoole Avenue, came from Bury St. Edmonds. A baker employed by local firms, he lived in Hornsey for 40 years and died in May 1939. He was a great favourite with the children of the neighbourhood who called him “Daddy” Doe.

One other Philosopher deserves more attention. Page Horner Woodcock lived at 11, Rosebery Gardens from 1907 until moving shortly before his death in 1934 to 46, Middle Lane. In 2006, his great, great nephew, Ray Woodcock, asked the HHS Archive Team to find out about his uncle. As a result of our research Ray wrote a biography of “Uncle Reg”, as he was known to everybody in Hornsey. This manuscript is in the H.H.S. Archive where it can be read on request.

“Uncle Reg” was a fervent Weslayan Methodist and lay preacher who came to Hornsey from Lincoln as a very successful manufacturer of ‘Page Woodcock’s Wind Pills’. He built a housing estate in Wembley with the profits. For some time Woodcock had been writing children’s stories in Methodist publications and he continued to do so in Hornsey, publishing a thousand stories in books and a journal.

These stories were moralistic and strongly Methodist in tone and content. They found favour in the 1930s, though they wouldn’t find many readers today! There is a grainy picture in the Archive collection showing a gentle-looking, old, moustached man with a cat and a dog, entitled ‘Uncle Reg and His Pets’. On the reverse side is a poem by him entitled, ‘Try Again’ with an advertisement for ‘Uncle Reg’s Book for the Bairns’ underneath. Arthur Blake’s eulogistic tribute to Page Woodcock included reference to his, “kindly nature and to his beneficent life’s work on behalf of his fellow men”. 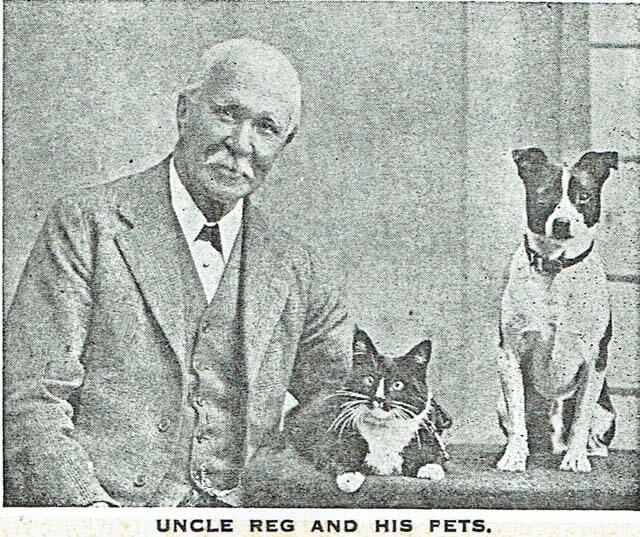 As well as the annual cricket match and regular bowls competitions, with shields presented to the winners, the PPP held competitions amongst themselves for chess and cribbage, dominoes, darts and draughts and they held a fortnightly whist drive. An annual Tea and Dinner and a Summer Outing were soon added to the list of events and proved to be highlights of the year. Often their formal meetings and their annual Tea were held in the Moravian Church Hall in Priory Road.

In 1936 they asked Rev. Mellowes, the minister, to become their Chaplain. Monthly Church Parades became the order of the day. Not surprisingly, attendance at funeral services was a regular occurrence. Many of these took place at the Moravian Church with the Philosophers lining the approach to the church and forming a guard of honour to add dignity to the solemn occasion.

As well as the lusty singing of hymns, the Philosophers sang at every possible opportunity. The combined ages of the participants in the Minstrels Show in the Moravian Hall in January 1934 was 1,090 years!

The P.P.P. listened to the occasional lecture, such as that given by the Vicar of Holy Innocents’ Church, Tottenham Lane, Rev. Chesnutt Chesney, on the meaning of the word ‘philosophy’. By the A.G.M. in February 1939 the membership stood at 109. Their hut in Priory Park had been refurbished and a billiard table installed to add to the number of games available. The gift of a piano was a welcome addition also.

As dark clouds gathered in the autumn of 1939 the Philosophers braced themselves for the task ahead. In their October meeting, Councillor Blake thanked them for their “hearty response” to the appeal for volunteers to assist in supervising the air-raid shelters in the borough. Their duties were explained to them and they were assured that training in first aid and anti-gas drill would soon be provided.

Throughout the war, forty PPP members supervised air raid shelters between sunrise and sunset, organised by the redoubtable Councillor Blake. He used the columns of the Hornsey Journal to ponder how much tobacco they would smoke during their vigil and hinted to readers that the Philosophers were not particular as to the brand of tobacco they smoked!

In January 1946, sixty eight Philosophers, their spouses and friends sat down to a Victory Dinner. All agreed that it was one of the pleasantest evenings they had spent for a long time. Their combined ages on this occasion totalled 4,265 years!

After the war, Alfred Blake remained the lynchpin of the PPP. He continued as Chairman and at annual Dinners at Wilson’s Restaurant, Crouch End, he was famous for introducing the speakers in rhyme. In his 1950 Dinner speech Blake reminisced, “There are five of the original members left. I do not know any man who has regretted joining us”.

Many speeches in the post-war years focused on the role the Priory Park Philosophers played in the lives of these elderly gentlemen. It provided social fraternity for lonely men and proved that there was nothing to fear from old age apart from sitting around doing nothing. Successive Mayors and Mayoresses lent tangible support to the PPP and undoubtedly it was the forerunner of Council-sponsored clubs for old people.

So when you’re next in Priory Park pay a visit to the ‘Philosophers’ Garden’ named after them. No doubt during their chats they tried to ‘put the world to rights’. Perhaps we need some Priory Park Philosophers today?

Photograph of the Philosopher’s Garden by Laura Patsko