This article by Pamela Jefferys links with two previous ones on the history of the Archway Road and Highgate which were written in connection with the Archway Road Inquiry 1973. This had been prompted by a proposal to develop a motorway-standard dual carriageway road from the Wellington pub junction, north of Highgate village, and the old London County Council boundary at Archway Bridge. That proposal would have meant, (i) the demolition of about 170 houses and shops, (ii) increased deterioration in the environment, (iii) a blight on property and on the lives of many people in the area.

In 1973 when the first Archway Inquiry opened (officially known as the A1 Trunk Road (Falloden Way Barnet, Prescribed Route Order No 198) it was, in comparison with what was to come later, a relatively subdued affair. It had received little publicity in the press, and would have passed uneventfully into history if it hadn’t been for the stupidity of the Department of the Envionment. For when the plan was unveiled it was discovered that no slip roads had been included, which meant that the Woodman pub was stranded on a little island with no access to either Highgate Village or to Muswell Hill! Therefore, according to the rules another Inquiry had to be held. And this time the public was well alerted, with a lot of hilarity at the Department’s expense. 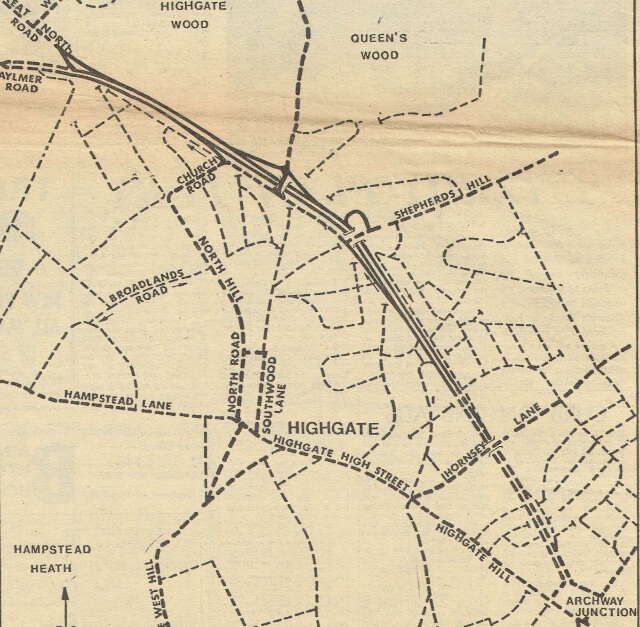 On the first day of the new Inquiry about one thousand people turned up to fight the scheme which would destroy many of the fine turn of the century houses and shops which lined the route; their residents being offered just enough compensation to buy them according to a leading opponent, George Stern, “a one bedroom flat in the Tottenham Marshes”. All the heavy traffic and buses would be funnelled up the A1 to the North, or down towards Dover in the South.

Chaos reigned on the first day of the new Inquiry. The objectors came bringing their children and their lunch, prepared to camp out to see off those who wished to destroy our very pleasant part of London.

Residents’ committees were set up; rotas to ensure 100% attendance at the Inquiry and local talent surfaced with the promise of a daily news sheet with a clever editor and a cartoonist. A list was made up of objectors and potential speakers. Some of us joined the newly formed Archway Improvement Association (with tongue in cheek because that is what the Department called the Scheme). Our very own Hetty Bechler was nominated Chairperson. She was quite unfazed at the thought of meetings of a few hundred people. She said she had learned her skills in the National Union of Teachers (NUT). I was named as Secretary.

We told all the objectors that they had to register to speak. The list numbered thousands. The Department realised that the Inquiry was going to take several years. The Inspector eventually had a nervous breakdown. The next one tried to speed up things by decreeing that only the objector due to speak was admitted to the hall.

Ken Livingstone who regularly attended the Inquiry (as did Jeremy Corbyn) was appalled. He said this was not democracy and told us all to wait outside the door until it opened and then to follow him in. It was a very hot day and all the French windows in the hall were opened. When the objector finished his speech he was let out and hundreds of us followed Ken into the hall. The Inspector saw the crowd with Ken at its head, coming towards him, and rushed through the windows and down the fire escape with Ken in pursuit. Ken said afterwards that it was the happiest day of his life!

The Inquiry continued slowly. At the same time there were demos, marches, phone-ins and letter writing to MPs and newspapers. Meanwhile STAMP (Stop the Archway Motorway Plan) led by George Stern, a statistician and Highgate resident, and his associates had been carefully checking the Department’s figures. They didn’t add up! Inspector No.3 resigned.

In 1984 (appropriately) a 4th Inquiry was set up with Air Marshall Sir Michael Giddings as Inspector. He was soon to complain bitterly about his treatment by the objectors – harassment, night-time phone calls, trespassers in his garden, packets of dubious content put through his letterbox etc, etc. We in the Archway Improvement Association were found not guilty. The Inspector duly resigned. The latest batch of the Department of Transport’s figures were once again not to add up!

The Inquiry was quietly abandoned and the scheme buried, we hope for all time. According to the Times, “the main force behind the objectors seems to have been a group of articulate, middle class residents”.

This article was written in 2019 by Pamela Jefferys, a Muswell Hill resident and campaigner on local issues. Pamela was the Secretary of the Archway Improvement Association at the time of the Archway Inquiry.