An extract from an editorial in the Hornsey Journal, 6 June 1919

The statement was made not long ago that on the removal of the German prisoners from the Alexandra Palace the Government intended to use the premises as public offices.

Some surprise was expressed because of the situation of the building and further developments were awaited with interest both by the staffs of the departments likely to be affected and the inhabitants of the neighbourhood.

The annual meeting of the Trustees of the Palace was held last week. Mr. Sloper said that up to the moment they had heard nothing whatsoever from the Government. He understood unofficially that the Germans would leave in a very few days. The public were told some months ago that the transfer of the present unwelcome occupants was imminent but the rumour may have been nothing more than ‘intelligent anticipation’. It is likely that Mr Sloper’s information is accurate. Now that the danger of air-raids is over the continued occupation by Germans is more than ever unwelcome.

What the opinion of the clerical staff will be when they learn of their transfer from London to Alexandra Palace remains to be ascertained. It is one thing to travel daily to a central spot in London and another to have to make their way from their homes in and around London to a building some five miles to the north of it. It may be that special trains will run from King’s Cross to the Palace in the morning and back in the evening but clerks do not all leave at the same hour. And it will be impossible to obtain meals in the neighbourhood.

At a meeting of licensed victuallers and others at Crouch End on Tuesday it was stated that from four thousand to six thousand Government clerks would be brought to the Palace and, “would require houses or lodgings in the neighbourhood”. If the Government are to retain possession of the Palace for any considerable period they ought to pay something more for it than the bare cost of maintenance and wages.

The districts which subscribed to the purchase of the estate are being deprived of the enjoyment of it. And the pleasure would have been very real during the delightful weather we have had of late. Every visitor would have hastened to inspect the improvements which the German prisoners have made. Mr Sloper says they have left their mark on the ground. Happily, it is not the same kind of mark they have left in Belgium and Northern France. The old fair ground, once a waste of barren land, has been abolished and new lawns and new gardens have been made. A bowling green has been prepared, though the turf may not be laid until the autumn. It will add to the enjoyment of the residents and visitors. The interned Germans will have done something to pay for their occupation of the Palace. 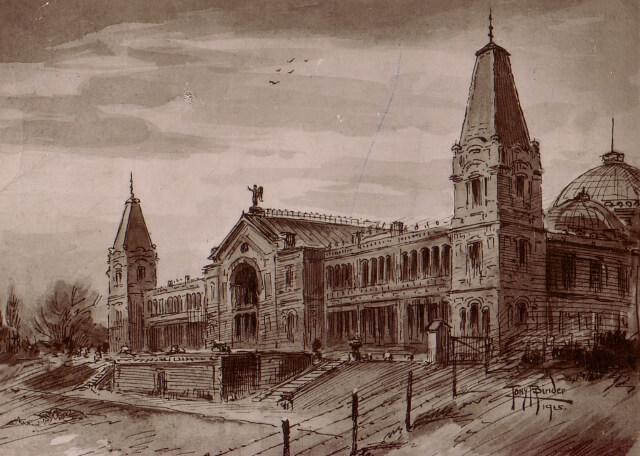