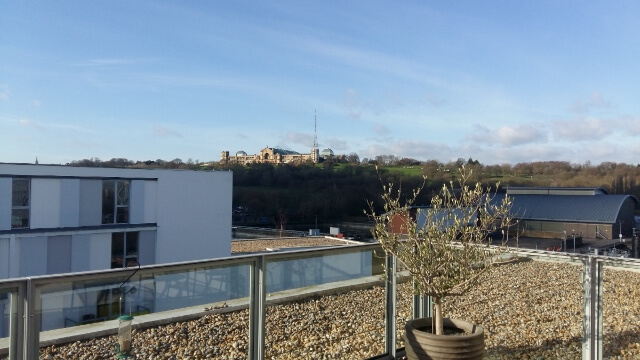 During the coronavirus lockdown and the fine weather that accompanied it I took the opportunity to sit on my terrace in the New River Village to focus on the view of Alexandra Palace and its surrounding Park.

The Palace and Park now occupies the area once covered by Tottenham Wood which was part of the holdings of the Lord of the Tottenham Manors. The original size of the Wood is not recorded but Robinson (in 1818) suggested that in 1500 it covered “several hundreds of acres”.  In 1508 Sir John Risley, then Lord of the Tottenham Manors, felled and sold 160 acres of the Wood for private gain.

In 1619 the Earl of Dorset, then Lord of the Manor, conducted his survey of Tottenham recording the size of the Wood as 388 acres and containing 4666 trees.  At the time of the auction of the manorial estate in 1769 The Wood comprised 367 acres which had been cleared and cultivated.

The estate was purchased by Michael Mitchell a City tobacconist and became Tottenham Wood Farm. In 1843, the Farm occupied 369 acres but only 39 perches of the original Wood remained.

In 1863 the Farm was purchased by the Alexandra Park Company to establish what eventually became Alexandra Palace and Park now comprising about 200 acres. Today, in the Nature Conservation area in the north-east corner of the park can be found mature oak trees probably descendants from Tottenham Wood itself.

It is difficult to visualise that Tottenham Wood, along with Enfield Chase were the last refuges of wild animals such as deer, wild boar and partridge and consequently were popular for hunting. In 1623 King James I, who had Tottenham Wood enclosed for his exclusive use, made a visit and found the gates and fences in disrepair and was moved to complain to the Lord of the Manors requesting their repair and he be given a key to unlock the gates during his visits.

Tottenham Wood also became part of local folklore in the form of two proverbs, first recorded by Bedwell in 1631 but reported to have been of much earlier origin.  They were: “you shall as easily remove Tottenham Wood”.  This relates to things not achievable, alluding to the size of the wood and hill.  The other was: “when Tottenham Wood is all on fire, then Tottenham Street is nought but mire”.  This relates to when the wood is shrouded in mist, giving the impression of smoke, the resulting wet weather would have consequences in Tottenham street or village.