An Extract from a profile in the Muswell Hill Record, 8th May 1908 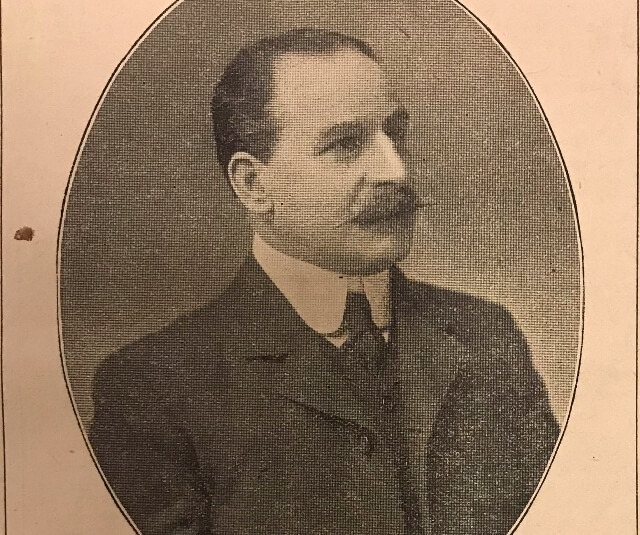 If the man who makes two blades of grass grow where one grew before is a benefactor, surely the man who builds a beautiful town, and builds it well, is equally so. Muswell Hill has been built by men who may almost be counted on the fingers of one hand, and it is certainly a credit to its builders. Foremost among the men who made our beautiful suburb is Mr James Edmondson, who may indeed claim the credit of discovering Muswell Hill.

Mr Edmondson has always lived in North London, and it was while out for an occasional spin on his cycle that the natural beauties of Muswell Hill and its advantages as a prospective suburb first impressed him. Only eleven years ago Muswell Hill was quite rural, fragrant hedge-rows and smiling meadows stretched on every hand, and practically the only residences were a few fine mansions standing in beautiful timbered parks, many acres in extent.

It is no more than ten years since Mr Edmondson first took in hand the development of Muswell Hill as an up-to-date suburb by purchasing the large estates occupied by ‘The Limes’ and ‘Fortis House’, two fine mansions. These properties when they came into the markets were in the possession of Mr Renton, a very wealthy gentleman who used his extensive park-like grounds as a stud farm. The estate fronted what are now Queen’s Parade, Station Parade and Fortis Green Road as far as Tetherdown.

Upon this estate – the first to be developed in Muswell Hill – Mr Edmondson built Queen’s Parade, Prince’s Parade, Station Parade and the shops in Fortis Green Road, besides the artistic residences on Queen’s Avenue, Prince’s Avenue and King’s Avenue. There were a number of fine old trees on the estate and these were preserved as far as possible. Some of them now stand on Prince’s Avenue, the very fine cedar tree at the end of the road being undoubtedly one of the finest in North London. In order to save this particular tree Mr Edmondson gave the land surrounding it to the the Hornsey District Council on condition that it was fenced round and preserved as a garden. It would be a splendid thing for posterity if all other builders in the suburbs acted in a like generous spirit when fine trees could be preserved at a little sacrifice.

Mr Edmondson has always adopted a liberal policy with respect to roads. When he began building, Muswell Hill-road was very narrow, not much more than a lane. Queen’s Avenue is now 65 feed between the walls, and 115 feed between the houses – one of the widest roads in the north of London, and worthy of the very fine residences which Mr Edmonson built there.

It was in Queen’s Parade that Mr Edmondson built his first block of shops in Muswell Hill and the experience ‘caught on’ at once. Among the first to take up these shops were the Manor Farm Dairy, Mr Randal, butcher and Mr Henderson, draper.

When building operations were in full swing about six years ago, and his builders were using between 25,000 and 30,000 bricks a day, Mr Edmondson was obliged to negotiate with the railway company with a view to providing his own siding at the nearest point to Duke’s Avenue. The siding was made where the footpath now leads to the stations platform, and Mr Edmondson had his own engine which was used to haul the railway trucks arriving daily with materials. This novel enterprise was favourably commented upon by the ‘Railway Magazine’, as probably the first time such a thing had been done by a suburban builder, and as quite an American method of overcoming a difficult problem. It was due to Mr Edmondson’s foresight that the present entrance to the railway station in Duke’s Avenue was provided and it was some years after he proposed to the BR that they should provide this entrance that they agreed to do so on his giving the land for the purpose. It is worthy of note that on all his estates Mr Edmondson has carried out the entire work by his own workmen – from the laying of the sewers and making of the roads to the applying of the last coat of varnish on the finished house.

Mr Edmondson is confident that Muswell Hill will continue to increase in importance and attractiveness. The proportion of empty houses is small, and fresh residents continue to come in from other districts as new houses are built. The demand for houses is very good.