This is the second article in the series on Lost Houses of the Hornsey area. This house has such interesting connections that a number of articles in the future will focus on its occupants and their connections.

The land is clearly visible as Plot No.275 on the Hornsey Enclosure Map 1815 when widows Ann Jaques and Louisa Jones are identified as owners of the two properties. Under the Enclosure Award 1816 they received additional strips of Southwood Common so owning the whole corner of land between Muswell Hill Road and the newly created Wood Lane. Southwood Hall, a gothic-style mansion, was built here c.1830. Today, the site is occupied by blocks of mansion flats, also called Southwood Hall, near The Woodman pub and Highgate Underground station at the N6 end of Muswell Hill Road.*

Origins of the House

The estate owners were the heirs of Thomas Jones, whose widow Laura is referred to above. We don’t know who commissioned the building of the 14-bedroom mansion but in 1832 it was advertised for sale on a 31-year lease, promoted as a ‘Castellated Mansion of the Olden Time’. Joan Schwitzer, long- serving HHS Chairman and President, wrote descriptions of the mansion and its occupiers in several early HHS Bulletins, and speculated that the architect was William Fuller Pocock, responsible for another ‘gothic extravaganza’, The Priory in Hornsey, built in the mid-1820s for Jacob Warner. 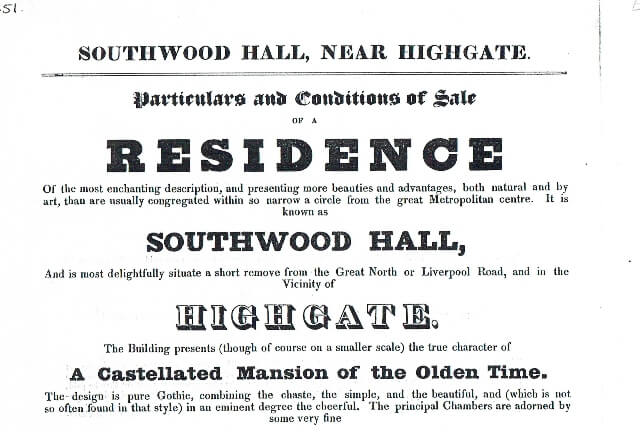 The Sales Advertisement put emphasis on the location – ‘beautiful, picturesque and healthy’. The property was suitable for a ‘Banker, Merchant, or any Gentleman, requiring the convenience of a ready access to Town’. The grounds had been laid out with ‘unusual care’; the ‘abundance of grapes, filberts, nectarines, plums, cherries apples, pears and other fruit’ was pointed out. ‘Nothing wanting but cabbages.’

The Entrance Hall, was over 40 feet long with a massive marble chimney-piece and rich stained-glass casement windows and a chequered patterned floor of Portland stone and black marble. On the right were inter-connecting family rooms, the Dining and Morning Rooms and a Library. From here French windows led to the terrace facing the garden. On the left side of the Great Hall was an octagonal spacious ‘gothic’ room with an oak floor, panelled walls and large mahogany framed windows, a gothic anti-room, a bathroom with a sunk ‘Basin…for a plunging Bath’ plus a dressing room with fireplace. The rooms had stained glass windows and elaborately gilded, coloured ceilings.

From the Hall, massive folding doors led to the principal staircase. This was in carved Portland stone with bronze-coloured wrought iron bannisters. One the first floor was a Boudoir with ‘Venetian’ (mullion) windows opening on to a large balcony from which, on a clear day, there was a 20-mile view of Crouch End, Hornsey and the wooded hills beyond. There were five bedrooms on this floor. Attached to one of them was a ‘Gothic chamber’ fitted out as an oratory with an arched ceiling supported by four oak pillars and painted stained glass. The second floor, reached by another wide staircase, accommodated five bedrooms hung with valuable tapestries. All these features were included in the lease. Accessed by a winding spiral staircase, the roof of the house also provided panoramic views.

The domestic arrangements were similar to those of same-size households with a largely unseen workforce sustaining the family’s lifestyle. The kitchen and domestic offices were in the basement. A spiral staircase led from ‘below stairs’ to the servants’ four bedrooms. Drinking water was obtained from a well and rain water for cleaning, washing and general household and garden use was collected in a large tank.

Southwood Hall was one of many suburban villas round London that Keane visited and described in his book. He was lavish in his praise:

‘It is a beautiful composition, most suitable for domestic purposes …The decorative masonry displays the most studied nicety and elaborate finish, and altogether it has more of genuine artistic quality than any other buildings of greater proportions.’

Keane approved the garden layout with the large lawn surrounded by a variety of shrubs. He would have seen the fir tree walk planted along Wood Lane, hiding the perimeter of the estate from view. He commented favourably on the banks of violets and lilies-of-the-valley which flanked the short tree-lined carriage drive from the main entrance of the house.

A short path led to a high brick wall and narrow doorway accessing Southwood Lane, now Muswell Hill Road. These are still in situ. On the opposite side of the road was an oak and hornbeam wood belonging to the Bishop of London, known to us as Highgate Wood. The east terrace, set out with flowers, had steps accessing the lawns. A variety of trees provided shelter for the bird life. One of the statues on the lawn, an Apollo in Coade stone, remains in situ today. A path led to Churchyard Bottom, now called Queen’s Wood.

Joan Schwitzer identified four occupiers of the house between the 1840s and 1905 – Henry Virtue Tebbs, a Proctor in Doctors’ Commons, William Jardine who worked in the City, William Holloway, a coat manufacturer and lastly John Cathles Hill, well known builder and property developer. The stories of Tebbs and Hill will be told in other articles. The mansion was a girls’ school from 1895 to 1930 after which the Hall was knocked down and the blocks of mansion flats built.

*A map of Southwood Common can be viewed on page 48 of HHS’s 50th anniversary book, The Hornsey Enclosure Act 1813, by David Frith.