Charlotte Cowdroy earned a national reputation for herself as headmistress of the school she owned – Crouch End High School and College (1900-1974), which educated girls between the ages of 6 and 16 with a few staying on a year or two longer. It took boarders also. Miss Cowdroy’s strong beliefs of how girls should be educated in the 20th century raise our eyebrows quizzically in the third decade of the 21st century.

Charlotte Jane Howarth Cowdroy was born in Kennington, South London, on 5th January 1864. Her father Samuel Howarth Cowdroy was a printer with publishers Eyre and Spottiswoode. Her parents considered it extravagant to spend money educating a girl even though she showed academic ability at an early age whilst they sent her brother to the most expensive school in the district. Charlotte’s health was poor and at the age of 13 she suffered her first attack of rheumatic fever which left her permanently weakened and with very poor eyesight.

Before she was 14 years old Charlotte became a pupil teacher and by the age of 18 she was teaching a class of seventy children. School inspectors recommended that she take the Queen’s Scholarship and she went to Stockwell Training College. She started as an elementary teacher (primary school to us) but aged 26, inadequate nutrition and overwork led to a second attack of rheumatic fever which further undermined her health and weakened her heart leaving her unfit for work. Undeterred, she signed up as an external student at St Andrew’s University, working in the Library of the British Museum. She gained Honours in English Language & Literature and in the Theory and Practice of Education.

Owning her own school

Following the death of her parents she had the money and freedom to pursue her goal of owning her own school so that she could put into practice her many ideas on teaching girls. She heard of a Miss Hailes who was giving up her school to get married and a bargain was struck. Much house-hunting followed and she purchased 14 Weston Park, Crouch End. Her life-long friend, Eunice Hope Tritton, helped her set it up and on 4th September 1900 it opened with 30 small children. Soon she had an assistant, Miss Kirby. So successful was the school that pupil numbers rose rapidly to one hundred from whom Miss Cowdroy trained her own teachers – girls who stayed teaching in the school for many years – thus self-perpetuating the type of girls’ education in which she strongly believed. 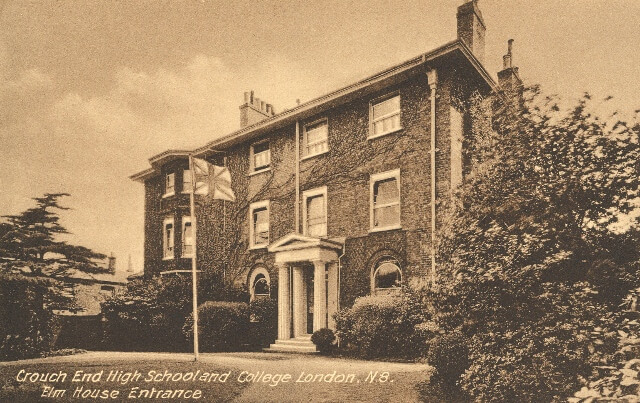 In 1906 she looked for a larger house to accommodate a rising roll and moved her school to 6 Fairfield Road, Crouch End. Five years later she rented ‘The Chestnuts’ in Middle Lane, next to the Recreation Ground (Priory Park from 1926) as a hostel for her boarders. Because of her delicate health and the strain of running two houses she looked for a large house and rented ‘Elm House’ on Middle Lane. Today Greig Close occupies the site. During the 1914-18 War she organised the Hornsey Prisoners of War Fund to support invalided soldiers. She was awarded the MBE for her work. She remained in charge of the girls’ education until 1932 when it became evident that the many years of poor health and the strains and stresses of running the school were overwhelming her. She died on 22nd September just as her pupils were starting the new school year. The school moved one more time in 1936 to premises in Hornsey Lane. Elm House was sold for development and bought by Hornsey Borough Council. 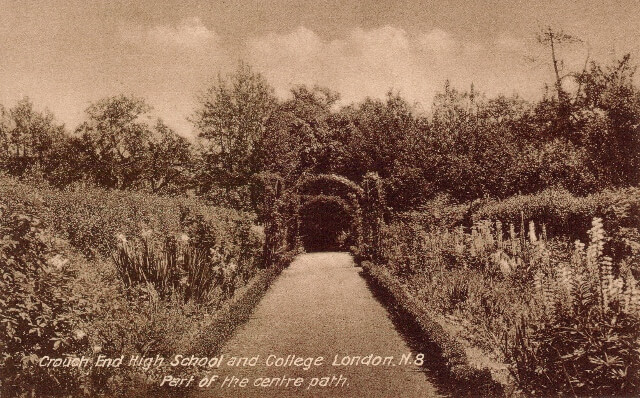 Her strident views on girls’ education

After the end of the First World War, Charlotte Cowdroy became outspoken about her views of girls’ education which had crystalised over the years. She nailed her colours to the mast in the school prospectus:

’The aim of the school is to put the highest ideal of womanhood before each girl and to bring out the very best in her …Girls are admitted at the age of six…The senior girls are greatly benefited by daily contact with little girls. The very large majority will become wives and mothers and the presence of little ones helps develop the womanly side of their characters, their pity, tenderness and kindliness. A certain hardness is sometimes found in the modern girl, and we are told it is part of the price paid for successful work in the world…From actual experience it has been found advisable by the School Committee to make the rule that girls shall not be admitted from the State-aided schools … It is better for girls to mix freely only with those from homes more or less similar to their own … the mixing of young girls of different social conditions too often embitters those less fortunate and at the same time causes the others to set too great a value upon or even take pride in purely adventitious advantages’.

One particular hobby-horse was the nature of physical education and she cautioned the amount and degree of exertion necessary because of, ‘the harm that was being done to the delicate framework of the growing girl by the strenuous training then current’.  She wrote vigorously on the subject in The Educational Times and in The Lancet. She wrote a controversial article, ‘Thwarted Women’ in the Evening Standard in which she stated that happiness in being a wife and mother was far superior to a successful career outside the home. Her views raised a storm of protest just a few years after women had played a vital role at home during the war effort and those over 30 had gained the vote in 1918 after the sterling efforts of the Suffragettes pre-War. A long discussion ensued in the columns of The Times which lasted many months and cartoons on the subject appeared in Punch magazine.

Her trenchant views not withstanding she did not bar the way to her pupils succeeding at university entry exams and getting paid jobs if they so wished. It cannot be denied that her pupils and staff had very happy memories of being part of Crouch End High School and College as accounts in several HHS Bulletins give testimony. Ex-pupil Mary Groves concluded in her article on Charlotte Cowdroy in Bulletin 31 (1990), ‘We all worked very hard in order to pass our examinations … and were well tutored to enable us to do so, but mainly I remember what fun it was to be educated by such a remarkable woman’.