The articles in HHS’s Bulletin 60 focus on the century between the ending of the First World War and the present day.

The first article is the most up-to-date piece of all – Janet Owen’s account of the setting up of the HHS website. She observes, correctly, the website’s voracious appetite for new content; we want to encourage all our users to think about making a contribution to it themselves.

Next come a couple of articles on topics particularly near to the heart of their authors. John Liffen gives a fascinating and brilliantly researched account, with family photographs, of the miniature railway at Alexandra Palace which ran, not without incident, for twenty years before its sudden dismantling in 1971.

Brenda Griffith-Williams tells the story of her grandfather, who died in the First World War leaving behind a young family, which is all the more moving for being so typical.

In her brief history of the Mountview Theatre Sandra Clark traces the extraordinary development over seventy years of a little local theatre into a major world-class Academy of Theatre Arts, now, sadly, lost to our borough.

Stephen Rigg and John Hinshelwood continue their series of articles on local shopping areas, this time, in contrast to the previous two years, describing a success story in their account of the shopping parade at the foot of Ferme Park Road. 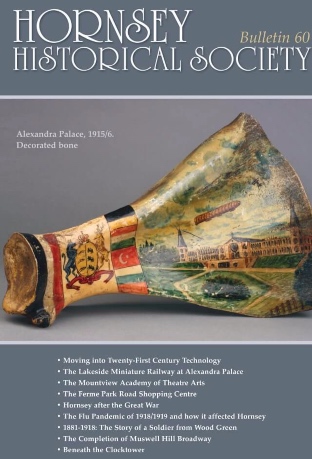 World War 1 and its aftermath

Nicholas Allaway follows up his series on the war in Hornsey with a look at the adjustments made in a time of peace, locating Hornsey’s response within a national context of economic and political uncertainty.

Eleri Rowlands hones in on a particularly tragic event – the flu pandemic at the end of the war – and how it affected families in Hornsey, where nearly 800 people died in consequence of it.

Among the shorter articles David Frith details the completion of the parade of shops on Muswell Hill Broadway. David Winskill contributes an account of the generation of Harvey Marcus’s film about Crouch End, Beneath the Clocktower, which is available for viewing on the website, and also two book reviews.

The Bulletin can be purchased for £5.00 by non-members and is free to all members. If you aren’t a member and would like to join you can find details on the membership page. As well as the Bulletin, members also receive our quarterly newsletters, free entry to all our monthly lectures and advanced invitations to all special events and outings.

Write for the Bulletin

We welcome contributions to the Bulletin from interested authors, who do not need to be members of the Society. Articles for inclusion should be concerned with Hornsey, its residents and its history. A length of about 2-3000 words is suggested, but shorter pieces such as letters or reviews of books about local history can also be accepted.

All articles are read prior to acceptance by members of the Publications Committee, who may suggest revisions. Material should be sent by email attachment in Word format (not PDF) to the Editor, Professor Sandra Clark, who will be happy to deal with any questions about potential contributions. Illustrations are encouraged.