Cromwell House on Highgate Hill is the only Grade 1 listed building in the former Borough of Hornsey. Never connected with Oliver Cromwell, the house owes its status mainly to its magnificent grand staircase dating from 1638 which is decorated with carved newel posts of military figures. Currently the house is occupied by the High Commission of Ghana. Its history has been a chequered one and was covered in our  newsletter in the 1980s by Peter Barber. 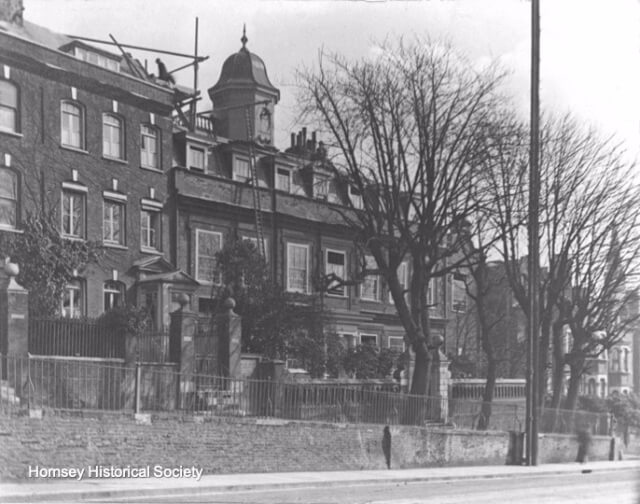 Newsletter 38: December 1986
The sad saga of Cromwell House has continued. In July, Haringey, heeding the complaints of local residents and The Highgate Society, refused planning permission for the proposals of Berkeley House which would have involved some building in the garden and the conversion of the main house (with a few alterations) into flats.
Since then a working party to discuss the future of the house has been established (which has not yet met) and an agreement has been reached with the owners for the building to be improved. This comes after yet another theft – a marble fireplace in one of the principle first floor rooms has now joined the majority of the carved statues that line the staircase and were the chief glory of the house.

No organisation or millionaire has yet surfaced who would be willing to take on and repair the house and keep it as a unit (despite the relatively low asking price). Berkeley House is believed to be considering an appeal to the DOE against Haringey’s refusal of planning permission and Haringey itself is yet again contemplating the idea of purchasing the house, though with what funds is not clear – particularly since it is itself rate-capped. The working party may well prove to be no more than a cosmetic talking-shop. In short, the outlook seems exceedingly bleak.

Newsletter 40: August 1987
The main conservation story (1986-87) has been that of Cromwell House. Last summer Berkeley House was refused permission to build extensively in the garden and to convert this Grade 1 listed building of 1638 into flats. Their appeal to the DoE against this decision was heard at Hornsey Town Hall on the 14th and 15th of July. In the meanwhile the building has continued to decay and has been subjected to break-ins. Internal decorative features, including a marble fireplace and carvings from the staircase newell posts, have been stolen, dry rot has been discovered and a first floor ceiling has fallen in.

In order to find some solution Haringey set up a working party, consisting of representatives of officers, councillors and local groups (including the HHS). The working party has been genuinely bipartisan and it has met regularly. Haringey’s attempts to serve a repairs notice were thwarted for several months by the difficulty of discovering which company actually owned the house.

In the end it turned out to be not Mountleigh, nor Berkeley House but Brawley B V, a company based in the Netherlands Antilles. A modicum of repair work has since been undertaken but the house gets more and more dilapidated. It remains far from secure and its managers refuse to provide 24-hour security. Haringey have set in train procedures for its compulsory purchase with a view to re-selling it to individuals or bodies with the will and ability to restore and maintain the house in an appropriate manner. It is not clear at present, however, whether Haringey has the means to purchase the house, even temporarily.

Peter Barber has been Chairman of Hornsey Historical Society and he is its current President. He has written a fascinating article on Cromwell House in the hot-off-the -press annual HHS journal, Bulletin 61. You can purchase a copy for 5.00 + p&p.