During the Covid pandemic thousands of people have walked along Alexandra Palace’s south terrace admiring the spectacular views of London. How many have noticed the two carved tablets either side of the Great Hall’s main entrance? Or realised that the Palace’s recent huge financial losses are a recurring theme of its 148 year history? 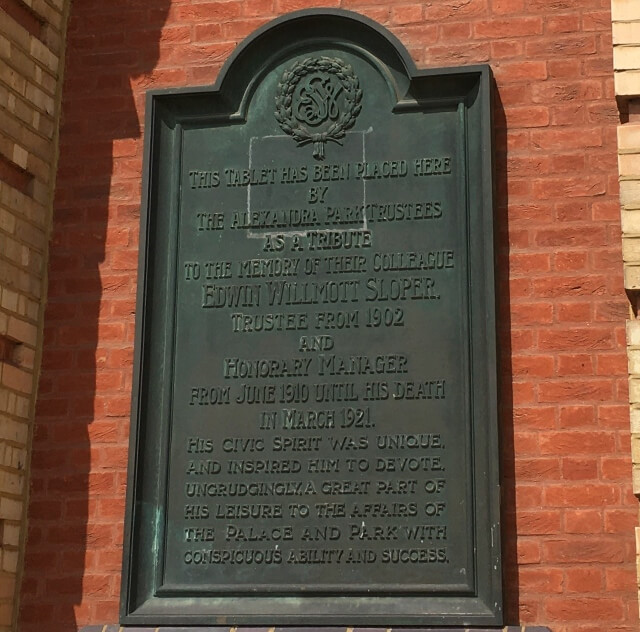 The commemorative tablets are to Henry Burt JP who, in 24 hours in 1899, raised a £5,000 deposit to save the Palace from the hands of speculative builders, and to Alderman Edwin Sloper who worked himself to a premature death managing all aspects of the Palace in the following years. Who were these two Sir Galahads who are almost totally forgotten today? 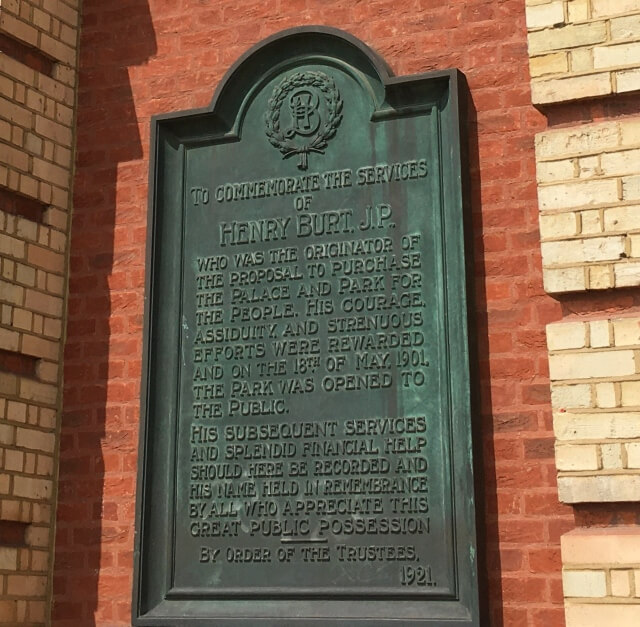 Born in London, Burt joined the family printing business and joined Hornsey’s Local Board at a time of rapid change. He had time and money to spare to respond to the challenges. He gave his formidable energies to collecting public funds for commissioning and building the Clock Tower, Crouch End (unveiled June 1895) as a permanent recognition of Henry Reader Williams’ unique contribution to Hornsey’s Local Board (1884-1894). Then Burt turned his attention to providing educational amenities for Hornsey’s residents, in particular public libraries; in Hornsey (1899), Stroud Green (1901) and Highgate (1902). He was involved in the purchase of Queens Wood, believing like HR Williams, that open spaces were essential for health and recreation, and he campaigned, unsuccessfully, for swimming baths.

He championed the use of electricity and the new Borough of Hornsey built its own generating station in Tottenham Lane in 1903. He had an impressive career in local government – Hornsey Councillor, Vice Chairman and Alderman of Middlesex County Council and Chairman of its Tramways Committee, Vice Chairman of Highgate Petty Sessions, member of the Lord-Lieutenant of London’s Advisory Committee, High Sheriff of Middlesex 1917-18, and Chairman of Wyman & Sons Ltd (printers & publishers).

Amazingly, he found time for his other interest – Alexandra Palace. Like HR Williams, Burt believed that it should be in public ownership. From 9th June 1873 when it burnt down, successive owners battled with mounting debts and sold land for building development. The Palace was closed for years, except on special occasions, and in 1900 put on the market. Burt found that a lease was on the eve of being signed by speculative builders. He was granted 24 hours to find the £5000 deposit which he did with the financial help of prominent local figures. The Palace and Park were purchased for £150,000, the money raised by seven County, Borough and District Councils. A corporate body called The Alexandra Palace Trustees was constituted (1900) with representatives from the seven Councils. Burt was Secretary to the Trustees until 1910 when he became Chairman. He campaigned for electric trams to run to the Palace and contributed generously when financial short-fall threatened to close it.

Sloper was a West Country man, born in Wiveliscombe, Somerset. He followed his father’s career in banking and came to London in the 1880s. He became a Hornsey councillor and after it became a municipal borough in 1903, was Deputy Mayor for seven years. Like Henry Burt, he gave his free time and energy to Alexandra Palace.

Unfortunately, the £150,000 purchase money did not include working expenses and the Palace went into debt in its first year. Despite laying on novel entertainments such as a circus, roller-skating rink, cycling velodrome and daring aerial feats, the debts began to mount. By 1907 the building and grounds were in a bad state, only the racecourse made money. That year Sloper, who became a Trustee in 1903, becoming Mayor of Hornsey 1907-08.

Despite his onerous civic duties and a full-time job, he was soon an indispensable part of the Palace management, reportedly sweeping floors, tidying up and doing repairs. Trustees helped out at major events to keep down costs and Sloper acted as stage manager at the Easter festivities in 1908. The following year he took on the role of Honorary Secretary and Manager of the Palace. His banking experience led to a period of efficient financial management and regular programmes of entertainment. At last there was stability and a reason for optimism. He was Hornsey’s Mayor for a second time in 1913-14.

On 5th August 1914 Britain declared war on Germany and the Palace and Park closed immediately. Sloper remained in his honorary post looking after Belgian refugees until the last of them left in 1915, at Christmas, dressing up as Father Christmas with presents pinned to his costume. While German internees were incarcerated at the Palace and anti-German feelings took hold of the population, Sloper took on a new task. He became Chairman of the Hornsey Military Tribunal in 1916, deciding whether to accept or deny Conscientious Objectors the right to be exempted from military service. Research has demonstrated that this was a highly controversial role which he played ‘by the book’ with the Tribunal making some inexplicable and harsh decisions.

Henry Burt retired as Chairman of the Trustees when the war ended in November 1918. Edwin Sloper announced that he wished to retire also to spend time with his family, piano playing and stamp collecting but he was persuaded to stay on as honorary Manager and Chairman of the Trustees to see the Palace reopen. This was in a very dilapidated state and Government offices took over with the Palace and Park remaining closed. The Park finally reopening at Easter 1920. In March 1921 Edwin Sloper died, aged 55. It was the end of an era for Alexandra Palace.

The same year the Trustees decided to erect tablets on the exterior wall of the Great Hall commemorating Henry Burt and Edwin Sloper’s unique contributions. These were unveiled by Alderman WG Barrenger at a special event followed by a grand concert in the Great Hall given by The Alexandra Palace Choral and Orchestral Society in May 1923, the Palace’s 50th anniversary. Henry Burt was present and lived until he was 95. The tablets remain in situ on the south terrace.