Colin Chapman was born in May 1928 and brought up at 44 Beech Drive N2, on the border of Muswell Hill. It was a large family home. His father Stan ran The Railway Hotel at 5 Tottenham Lane next to Hornsey Railway Station N8. The Railway Hotel still exists although it is now Funky Brownz Shisha Lounge and Restaurant.

Chapman attended the Stationers’ Company’s School, situated in Mayfield Road, off Tottenham Lane. This school no longer exists and the site is now Stationers Park. Dr Mike Lawrence, who wrote Colin Chapman, Wayward Genius (2003), visited the Old Schoolhouse, HHS’s HQ, in 2001 and gave a range of material to the society. While there, he told us that he had located two close friends of Chapman’s while he was at Stationers’ School, one an author and illustrator of children’s books who taught at Hornsey Art School and the other a sculptor. Apparently, Barry Took, the comedian, was in the same class also.

An obsession with speed

Chapman’s girlfriend, Hazel Williams, later his wife, lived in Alexandra Park Road N10 in the 1940s where her parents had a lock-up. She supported Colin in his obsession with motor cars and speed, giving him money and the use of the lock-up for tinkering with engines. Behind his father’s pub in Hornsey were stables and a shed which Colin and friends used to start building Lotus cars. As the business grew, adjacent land behind the pub was purchased to accommodate the workshops. The showroom, office and workshops were 7, Tottenham Lane N8.

One of HHS’s correspondents who has lived in Canada for many years was brought up in Hornsey and remembers using Chapman’s ‘garage’ behind the Railway Hotel as a short cut through to Rokesly School in Rokesly Avenue on the other side of Tottenham Lane.

The Victoria History of the County of Middlesex Vol. VI, pages 156 – 7, has the following information on the establishment of Lotus cars in Hornsey.

Mr A. C. B. (Colin) Chapman adapted vehicles as Lotus sports cars at Muswell Hill and at Vallance Road, Wood Green, before moving into a former stable at 7 Tottenham Lane in 1951 where he established the Lotus Engineering Co. which was incorporated in 1953. The staff had grown to 30 by 1959 and the premises were extended with new offices and workshops in 1953 and again in 1957. Lotus cars, which won several motor racing trophies, were designed and entirely built in Hornsey until 1957, when the body building was done at Edmonton, but in 1959 the company moved to Cheshunt (Herts).

Dr Mike Lawrence told us that an early volunteer in the enterprise from Muswell Hill invented the turbine dentist’s drill!

Other people who worked behind the Railway Hotel were Keith Duckworth and Mike Costin, who founded Cosworth Engineering, and John  Crosthwaite who worked in the Experimental Department and helped develop and refine the Lotus 11. Also employed were two men who became racing drivers, Graham Hill, employed as a mechanic, and Ron Hickman who designed the Lotus Elan, Elan 2 and Lotus Europa, as well as the Black & Decker ‘Workmate’. The body building at Edmonton was carried out by Williams & Pritchard.

The Argyll Motor Co., situated at that time between Priory Road and Park Avenue South in what is now Wavell Mews N8, became involved in the Lotus enterprise also. In his article, ‘The Argyle Motor Co. in the Fifties,’ published in HHS Bulletin No. 42 in 2001, Robert Rust, who worked for the company, described the workshop where cars were serviced and rebuilt. He wrote, “We had the equipment for re-boring engine cylinders and for a period bored out Austin ‘7’ engines for Colin Chapman in the early days of Lotus Cars. At that time he was building his embryo racing cars in a large shed behind his Dad’s pub in Tottenham Lane.”

A Museum in Hornsey?

For some years John Scott-Davies, a classic Lotus enthusiast, and Alan Morgan, chairman of Club Lotus, have hoped to establish a museum and exhibition centre right where Lotus started in Hornsey. The project would also include a technical training centre at the site aimed at promoting to young people in Haringey the engineering skills and innovative technical methodology which Colin Chapman and his associates exemplified.

This aim is been kept alive through the website Colin Chapman  online archive. Do pay it a visit. The land on which the Lotus workshops stood has been a Jewson Builders’ Merchants yard for years. To date, the valiant attempt to erect a museum on the site has not come to fruition.

The office and showroom which Chapman used still stands. It was refurbished in 2016 by a plumbing outlet.

The plaque (1984) commemorating Chapman and Lotus cars is preserved on the side of this small building. In 2004 Haringey Council added 7 Tottenham Lane to its Register of Local Listed Buildings. 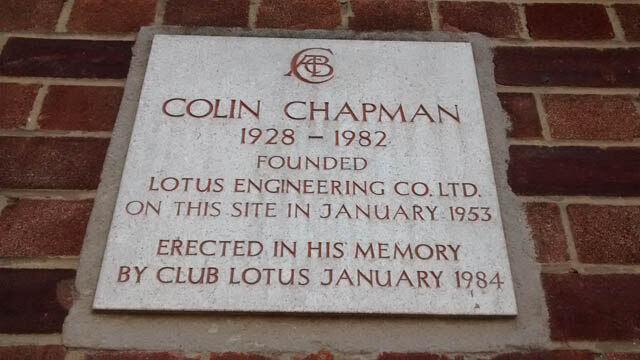 If you have relatives who worked for Chapman and Lotus and/or any further information about Chapman in Hornsey we’d love to hear from you in the comment section at the bottom of this page, or email the Archive Team at hornseyhistoricalarchive@gmail.com.

The Works – Sports Car and Lotus Owner, Vol. 2 No. 1 January, 1958. A fascinating article describing a visit to the Lotus works at Hornsey.

Photographs of the Hornsey Lotus works. Twenty photographs taken by  Bridget Bishop (professional name Corry Bevington) in the autumn of 1957.

Historical Origins; Chapman/Lotus: Parts 1 & 2. These two articles identify the buildings and proximity of the friends and connections that helped Colin Chapman establish Lotus at Hornsey from the late 1940’s