Anthony Salvin (1799-1881) was one of the most successful British architects in the first half of Queen Victoria’s reign. The reason why we note Salvin today is because of his association with Hornsey and East Finchley.

Although Salvin has been heralded as an early pioneer of Gothic Revival, he was at home designing in a number of different styles and interpreting historic styles with ingenuity to meet his clients’ needs. He did not take part in the battles of styles which occupied the attention of many more well-known architects in the later years of the 19th century. Probably this accounts for his name not being known to the general public today.

However, he was well known to the rich landowners who wanted to build country houses or modernise their castles. In his day he had an enormous practice all over the country and in one year his business income reached £24,000. (well over £1 million in today’s prices.) Two outstanding examples of country houses which he designed are the remarkable Harlaxton Manor in Lincolnshire, built in a pre-Renaissance Tudor style, and the similarly styled Thoresby Hall in Nottinghamshire, designed some 30 years apart.

Castles from Alnwick to Windsor and the Tower of London were extended and modernised by him. In 1844 Salvin also built, from scratch, a brand new castle at Peckforton in Cheshire for George Tollemache the local MP, who feared civil unrest and intended his castle to be capable of withstanding siege by the rowdy elements of the population. In addition, his practice included a number of churches, university buildings, public buildings and schools and all through his career he was entering architectural competitions such as that for the new Houses of Parliament. He also restored a number of churches which seems to have been done in a rather drastic manner. In her book, Anthony Salvin – Pioneer of Gothic Architecture, (Lutterworth Press 1987), Jill Allibone comments that Salvin had no sympathy with the views of William Morris, who, amongst others, founded ‘The Society for the Protection of Ancient Buildings’ four years before Salvin died. They were concerned that church restorations were destroying all trace of the mediaeval origins of parish churches. With his contemporaries, like Gilbert Scott, Salvin must bear part of the responsibility for the rape of the English parish church in the 19th century.

In 1833 Salvin, with a wife and family to support, thought it desirable to move to the country for the health of his children and bought a 60 year lease at £100 per annum on Elm House (subsequently renamed Elmhurst) in East End Road, East Finchley. The house, although badly built and in need of repair, had a large garden, stables and coach houses and ten acres of paddocks. It had views over the local beauty spot, Bishops Wood, and was convenient for the London omnibus, stopping at The Bald Faced Stag, by which Salvin could reach, in one direction, his London office and in the other his projects in the North. Salvin soon began to buy other pieces of land in the neighbourhood and with his brother-in-law William Nesfield bought adjoining plots in Fortis Green within the western corner of Hornsey, on which they built two houses designed by Salvin in the Italian villa style. 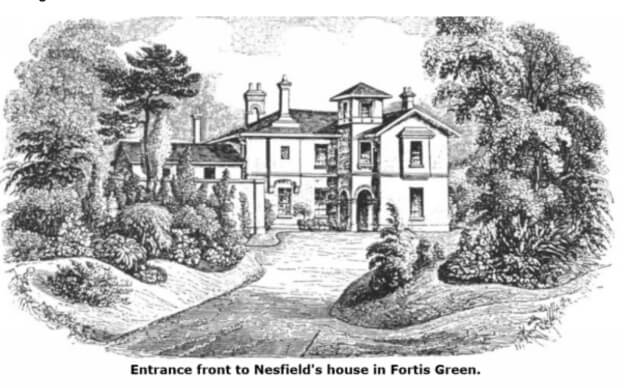 Nesfield laid out the grounds, landscaping the formal gardens near the houses as a single unit organising a small sheep-rearing enterprise in the meadow beyond. An unusual feature of the houses was that ancillary offices and out buildings were sited on the road side of the houses in order to maintain a clear view of the gently sloping meadow to the south with its views of Highgate.

J C Loudon, the publisher of The Gardener Magazine, saw the houses in 1838 and was so impressed that in his 1840 issue he published an article on them. Nesfield said that sheep were kept at Fortis Green, in preference to a cow, the family being small and because the neighbourhood abounds in farms, the supply of milk and butter was cheaper than they could produce on their three acres. Salvin, however, did keep a cow for his family’s milk and butter and was engaged in farming activities on a larger scale than Nesfield. Salvin’s young daughter recorded in her diary, “We went to see Papa’s bull in Fortis Green.” He seems to have dealt in land and sold land for building and is recorded as owning fifty-eight acres in 1878. Salvin let his villa in Fortis Green but Nesfield lived in his until he became the Drawing Master at Eton College.

In addition to large houses and castles Salvin designed a number of small school buildings including the St James School in Fortis Green which was erected in 1850 and extended but demolished in 1970. He also built St Michael School in North Hill Highgate in 1852 and Holy Trinity School, East End Road, East Finchley in 1846-47 (now the Bopath Centre). The last two schools were Industrial Schools originally and the buildings still exist.

David’s new book, The Hornsey Enclosure Act 1813, is about to be published by HHS.  Look out for details of how you can purchase the book (£12.00 + p&p) on this website. Coming soon!