This is the story of the encounter Hornsey High Street had with trams during the first half of the twentieth century. 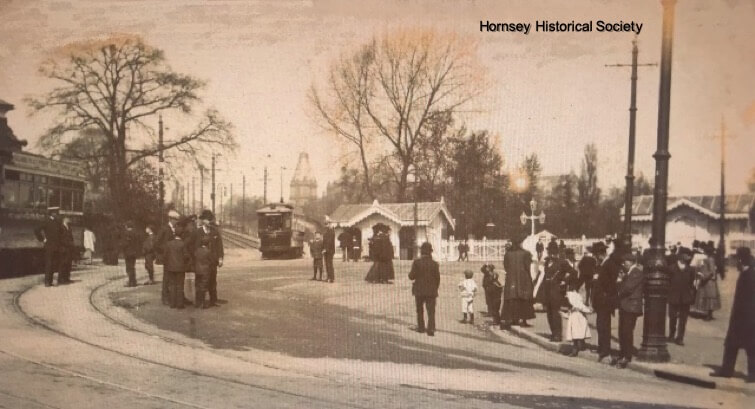 The first trams were not installed with the primary purpose of serving the people of Hornsey but as a means of transporting visitors to Alexandra Palace. A service of single deck trams was started by the Metropolitan Electric Tramway Company (the MET) in December 1905. They started at The Wellington pub on the corner of Green Lanes and Turnpike Lane, went along the High Street and Priory Road and then climbed steeply on their own right of way along the route now taken by the road to terminate near the west end of the Palace.

The company really wanted to operate double deck trams but was prevented from doing so because of the steepness of the hill leading to the Palace. So, in February 1906 it started an additional service from Finsbury Park via Green Lanes finishing at The Victoria (now The Victoria Stakes). Although it was at the bottom of the hill the stop was always described as Muswell Hill on the indicators. From then on the Alexandra Palace route operated only intermittently, sometimes only at weekends or when there was an event at the Palace and sometimes not at all.

The two routes received numbers in 1913. The single deck route became number 30 and the double deck route number 28. The 28 survived only a year because, in August 1914, the route was combined with London County Council’s route 51 under that number. The route now ran from Bloomsbury via Manor House to Muswell Hill (The Victoria). After this there were only minor changes. The 30 was renumbered No. 34 in 1926 and then, in London Transport days after 1933, No. 39. The 51 was diverted from Bloomsbury to run to Aldersgate after 1931. Briefly from 1926 a route using the number 34 ran using double deck trams from Bruce Grove to Muswell Hill overlapping with the single deck route.

Both routes were withdrawn in 1938. Unlike most tram routes withdrawn at that time they were not replaced by trolleybuses but by motor buses. A new route 144 (and 144a and 144b) replaced the trams between Turnpike Lane and the Victoria (still described as Muswell Hill on the indicators). The 233, which had started between Finsbury Park and The Victoria in 1934, was extended to Wood Green via new roads through the Alexandra Palace grounds. This was subsequently extended to Northumberland Park in 1949 and became the W3 in 1968.