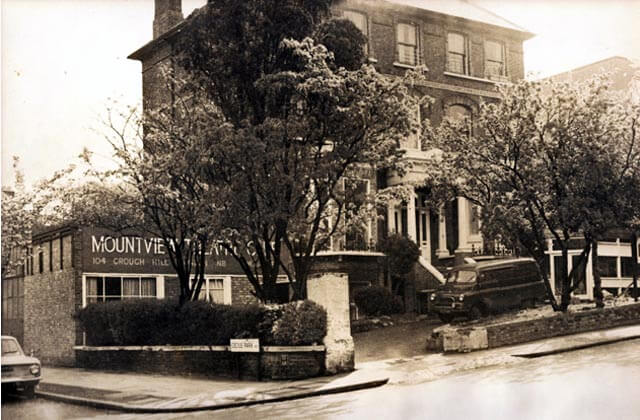 The Mountview Theatre (or, to give it its full title, the Mountview Academy of Theatre Arts) is sadly leaving Hornsey, where it was founded 72 years ago. In September 2018 it will reopen on a grand new site in Peckham. Do you have any memories of this wonderful institution you would like to share?

Sandra Clark is writing an article for the HHS Bulletin on the history of Mountview and would love to hear your recollections of plays seen at the theatres on Crouch Hill, of pantomimes or music halls, of the film club, of training there as a student, or anything else to do with one of our great, soon to be lost, local treasures.

Please share your memories in the comments section below or email Sandra Clark directly.

12 Comments on "Memories of Mountview?"

Does anyone remember anything of a fire, that started in the Mountview theatre bar (before 1965/66)?

Next to the Mountview Theatre was /is a row of houses similar, and I can visulize walking past one day with my sister and a group were practising in a garage of a house there. The music was pumping out, mainly drums , and we went in and learnt they were called ‘The Habits’ if I remember right. Wonder what happened to them?

I lived with my parents at 20 Warner Road and was a student of architecture at the Northern Polytechnic on Holloway Road.

In the fifth and final year 1967 we students had to propose a design project as our “Final Design Thesis”. It happened quite by chance that the local newspaper – The ‘Hornsey Journal’ – contained an article featuring the Mountview Theatre Club and Theatre School. This was a well-known local theatre club and school and was located in an old and very large house on Crouch Hill that had been converted in an ad hoc way over the years. There appeared to be an opportunity to relocate the club and school to a new site and included in the article was the entire planning brief i.e. the accommodation schedule. Curiously, although I loved cinema I had no interest in theatre but as an architectural project this was a great opportunity for me and was just what I was looking for. I had only seen one play there – “Look Back in Anger” which I did not like and the film made for TV “The War Game” by Peter Watkin, which had been banned by the BBC. I went along to the Mountview Theatre Club and met with the Principal Mr. Peter Coxhead. He was quite pleased to know that I would design his new Club and School. He set out for me his requirements for the building on the existing site because he thought that there was little chance in reality of getting the new site. So, I set to work and designed the new theatre club and school and quite comprehensive detail. The final design followed my own criteria as set out above: it had a clear concept. It was very practical: the external appearance was rather plain, however, it was my view at that time that the building as Mies van der Rohe had always said was the neutral background for the activities and that the users, mostly youngsters like me, would themselves embellish it with their own artistic efforts. It was not a grandiose design statement, much more a functional facility of some technical complexity. In the end the drawings and report were very simple and concise, strictly to the point and without waffle or bullshit. In the end I achieved an “Honours” degree and won the R.L. Roberts prize for Best Finals Student on account of my overall success. Other students had more attractive designs for their Final Thesis but were unable to deal with the written exams so well and thus missed out on this valuable prize worth 10 guineas. The Mountview Theatre Club later let me set up an exhibition of my drawings in the lobby, which was nice of them but of course the scheme never got built. I still have the final thesis. KF.

P.S. My mother Mrs. Muriel Fielder was secretary of the Hornsey Historical Society for many years. She passed away in 2014 aged 104.

My memories of the Mountview Theatre go back to the 1940’s when my parents were part of the club. I, aged about 7, was introduced to the stage , appearing in a play called ‘The Witches”.My main memory is meeting John Mills at the club when he came to see a play by his wife Mary Haley Bell called “Duet for Two Hands”. It gave me a taste for the theatre ,although I didn’t have much to do with the club after the 40’s.

A hundred plays – a thousand memories. Cheese on toast fingers with milky Nescafe from Mrs Lewis’s kitchen by the green room: a place of laughter and cameo, never quite rivalled by the bar when that took over a rehearsal room.

And what a way for a young person to launch into performance. When I joined, there were few university drama courses. Most ‘amdram’ recycled Rattigan etc.
Not so Peter Coxhead’s theatre on Crouch Hill! We were ambitious: Albee, Chekhov, Pinter, Shaffer, Sheridan, Dylan Thomas, Tenessee Williams, Wesker…

Along came a colourful School for Scandal, the melodrama Love Rides the Rails with singing grandad glaring from a picture frame, then The Purification (a lead for me!), an excellent review Nothing Serious created by Sam Simmonds, August 1961. Shaw’s Devil’s Disciple played Minack in Cornwall. Back in Crouch End, Robert Oates and Michael Jones narrated Under Milk Wood, graced by Jimmy Willmot as a memorable cockney/Welsh preacher! And… we would get a mention in The Hornsey Journal. Proud mums all round!

Costumes for every genre were magicked up by the remarkable Eve Caparn – an absolute trooper hidden in her wardrobe behind the tea bar.

As the first students into a new rehearsal hut, later blessed by Judi Dench, we fenced, improvised, studied script, projected from the diaphragm, fell in love (daily) and strutted our stuff on the wonderful thumpy apron stage. If the main spot (FOH4, remember, anyone?) failed, a student might well clamber aloft on a 15-foot stepladder. Yep, been there.

As now, there was true talent, and some took it to the West End and films – the start of today’s admirable throng. Despite temporary glass-box accommodation, then a major move, you can see in the eyes of the present troupe that the Mountview spirit thrives. Applause!

Who knows what seeds are sown? Do we realise it at the time? I moved on into journalism, voluntary sector leadership and a bit of radio – finally returning to full-on performance as a voice actor in faraway Devon. No furniture to fall over! No lines to learn! No smell of crowd or roar of greasepaint! But on a good day it is true drama – so to mention just three mentors long gone, oh am I grateful to founder Peter Coxhead, film buff Percy Childs and speech coach Eileen Norris.

Thanks for these wonderfully evocative memories, Howard. I particularly like your emphasis on the ambitious spirit of Mountview in its early days. I hope I can include some of this in my article.

Thankyou, Sandra. You are very welcome.

Good to read your name again, Howard. And flattered that you remembered the revue Nothing Serious (probably better than me!). You might be interested to know that I still keep in touch with quite a few of our contemporaries of that period and actually get to meet and reminisce with them, too. Happy days; thanks for reminding me!.

Hi Sam! Only just spotted your reply, now January 2019. That review you created was genius! In my mind I still hear Bobbie Barthe: “And Cathode and Anode created He” followed by his quavering “Good Heavens, Armageddon” as the TV image dwindles to a spot.
Bless the little pit-orchestra with its rattly drums and piano. Actually, I still have most of it on tape somewhere.
Yes happy days. I live and work in faraway Devon now. Give my love to any friends of yours who may remember me. Howard.

I too remember the good old days. Spent several years and acted, backstaged a numerous number of productions. The first production I saw was No.12.

My memories of Mountview go back to the 1960s when Peter Coxhead was the artistic director. I was then a trainee reported on the Hornsey Journal and chose to take an interest in the theatre club. I had to compete, however, with Lesley Downes who was the drama critic such as we had one and she was also my senior.
Anyway I spent many happy hours watching both rehearsals and performances. Peter rather took me under his wing and taught me something about the theatre and direction. I frankly forget most of it now but treasure the knowledge that such an accomplished man should take an interest in me.
It blossomed there and later when I began a part-time role as a theatre critic. I would like to think Peter’s advice gave me a gloss that helped the quality of my reviews. But others will have judged from the dressing room after reading my words!

Thanks for this, Richard. If you can remember any of the performances you saw I’d love to know.