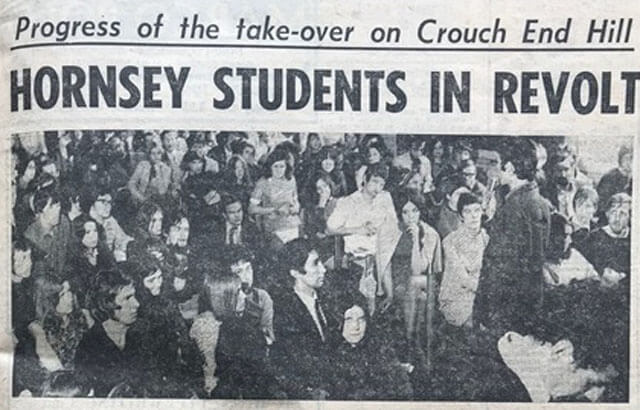 Aggrieved students of Hornsey College of Art who took control of the main college  building on Crouch End Hill on Tuesday had reached such a stage in their “revolt” by yesterday (Thursday) afternoon that they were working out their own system of art education. There was talk of starting their own classes and engaging staff on a consultative basis. Any staff who disagreed would be asked to resign.

The revolt has been supported by at least 600 of the 800-900 students. They are anxious to impress on the public that they are not trying to stir up trouble for its own sake – their object being educational improvements.

Disenchanted with the present set-up

The say they are disenchanted with the present administrative set-up. (The college is administered by Haringey Council. Yesterday (Thursday) morning, while the college principal, Mr Harold Shelton was having a meeting with heads of departments in his office students marched in and asked him to leave. He asked if he could finish the meeting, but the students replied “No”. He then left.

The students offered him use of their tiny attic office, but Mr Shelton declined.

Mr Shelton was not available to comment after he left the college yesterday. He had previously said he would see no pressmen, but a national newspaper reported that his secretary had claimed on his behalf that only 20 per cent of the entire college of more than 850 students were involved in the “takeover”. The others were carrying out normal work and were preparing for examinations. The work was going on in the six annexes and the Alexandra Palace building.

The trouble began on Tuesday afternoon when a large number of students seized control of the main college building on Crouch End Hill. They stayed inside for an all-night sitting and proclaimed they would occupy the building indefinitely.

Reason for the revolt is dissatisfaction with the college administration, overcrowded and inadequate buildings, and students are demanding a direct say in the running of the college. They ran the college canteen and took over the telephone switchboard. Bulletins from the students’ action committee were duplicated and circulated.

Shortly after the revolt broke out, the students put up a poster over the front gates: “Student Control of College.” The students demanded to see Mr Shelton, who was in Manchester and came back by an overnight train. On his return he remained in his office.

About 30 lecturers attended in college and several spoke in sympathy with the students’ demands. Representatives from about 16 other colleges in the London area came to give their moral support. Later on Tuesday P. Rigby, (Conservative leader Haringey Council) and Aldo George Cathles (the new chairman of Haringey Education Committee), came in to hear the debates, and to face the, mass meeting.

The students became suspicious when Cllr. Rigby said, “We can’t answer in detail; we are here to listen. We will put our ideas to the governing body of the college and hope they will meet your requirements.” Cllr Rigby, who reminded them that he had consistently opposed Hornsey College of Art being forced into a polytechnic, added, “We are in favour of you controlling you own funds and we will sit it goes through.”

On Wednesday morning bleary-eyed students showed signs of strain. Tempers were frayed, and there was impatience with “talk instead of action.” On Wednesday night after the sit-in had being going for 30 hours, there were some angry retorts when stewards urged that students should again stay in the building overnight. “You can sleep on the floor – there are plenty of rooms,” said one

“Have you slept on a hard floor?” a girl student protested.

When the steward urged that there was a choice between “Revolution and soft beds,” most of the revolutionist agreed to stay on. Some students did sleep on the floor again, but others having a second sleepless night, discussing art education until after 3 a.m. in yet another seminar.

Solidarity with the Hornsey students

By now 20 colleges and universities had sent 100 representatives to show solidarity with the Hornsey students. This added greatly to morale. As did the many telegrams.

On Wednesday night an epoch-making resolution was passed unanimously by about 4000 students. Proposed by a girl student, it demanded a majority of staff and students on the college’s governing body, fair discipline procedures with the right of legal representation, and freedom “to formulate and develop our educational aims.”

One girl student defined the “freedom” mentioned in the motion to mean “students will attend classes when they like and the staff will be here on a consultative basis.”

The was applause too, when the meeting heard that 24 lecturers had passed a resolution that the academic staff had a “community of interest with the students in being represented on the governing body.”

The resolution adds that, “the staff will work to less the fragmentation, alienation, and tension which teachers, like students, suffer in the college.”